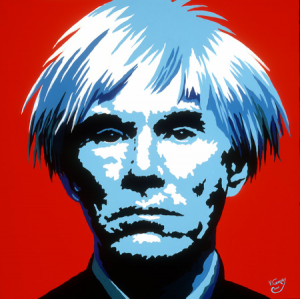 Andy Warhol (born Andrew Warhola; August 6, 1928 – February 22, 1987) was an American artist who was a leading figure in the visual art movement known as pop art. His works explore the relationship between artistic expression, celebrity culture, and advertisement that flourished by the 1960s. After a successful career as a commercial illustrator, Warhol became a renowned and sometimes controversial artist.

By the beginning of the 1960s, Warhol had become a very successful commercial illustrator. His detailed and elegant drawings for I. Miller shoes were particularly popular. They consisted mainly of “blotted ink” drawings (or monoprints), a technique which he applied in much of his early art. Although many artists of this period worked in commercial art, most did so discreetly. Warhol was so successful, however, that his profile as an illustrator seemed to undermine his efforts to be taken seriously as an artist.

Pop art was an experimental form that several artists were independently adopting; some of these pioneers, such as Roy Lichtenstein, would later become synonymous with the movement. Warhol, who would become famous as the “Pope of Pop”, turned to this new style, where popular subjects could be part of the artist’s palette. His early paintings show images taken from cartoons and advertisements, hand-painted with paint drips. Marilyn Monroe was a pop art painting that Warhol had done and it was very popular. Those drips emulated the style of successful abstract expressionists. Warhol’s first pop art paintings were displayed in April 1961, serving as the backdrop for New York Department Store Bronwit Teller’s window display. This was the same stage his Pop Art contemporaries Jasper Johns, James Rosenquist and Robert Rauschenberg had also once graced. Eventually, Warhol pared his image vocabulary down to the icon itself—to brand names, celebrities, dollar signs—and removed all traces of the artist’s “hand” in the production of his paintings.

To him, part of defining a niche was defining his subject matter. Cartoons were already being used by Lichtenstein, typography by Jasper Johns, and so on; Warhol wanted a distinguishing subject. His friends suggested he should paint the things he loved the most. It was the gallerist Muriel Latow who came up with the ideas for both the soup cans and Warhol’s dollar paintings.

He loved celebrities, so he painted them as well. From these beginnings he developed his later style and subjects. Instead of working on a signature subject matter, as he started out to do, he worked more and more on a signature style, slowly eliminating the handmade from the artistic process. Warhol frequently used silk-screening; his later drawings were traced from slide projections. At the height of his fame as a painter, Warhol had several assistants who produced his silk-screen multiples, following his directions to make different versions and variations.