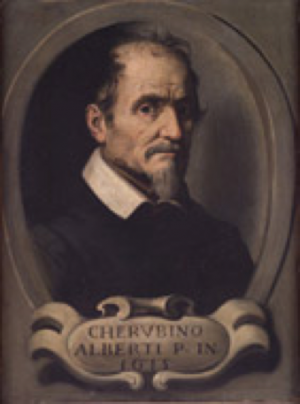 Alberti was born in 1553 in Borgo San Sepolcro, Tuscany (from which he took his nickname of Borgheggiano), into family of artists. He was the second son of Alberto Alberti, a carver and sculptor, and his brothers Alessandro Alberti and Giovanni Alberti were artists as well.

Alberti studied in Rome under Cornelius Cort and worked as an engraver, modeling his works after the inventions of other artists. His early influences included Raphael and contemporary Mannerist art. Between 1571 and 1575 he made engravings after works of Federico and Taddeo Zuccari. Over the next ten years his engravings included works after Raphael, Michelangelo, Polidoro da Caravaggio, Andrea del Sarto, Rosso Fiorentino, Marco Pino, Pellegrino Tibaldi, and Cristofano Gherardi. He also produced works based on ancient statues.

Later in life Alberti decorated palaces and churches with paintings in fresco. His most famous work was the fresco decoration of Sala Clementina in the Vatican, which he completed with his brother Giovanni. He painted for the church of Santa Maria in Via Lata. He may have been first a pupil of Cornelis Cort, and afterwards by studying the works of Agostino Carracci and Francesco Villamena.

At his death in Rome Alberti was Director of the Academy of Saint Luke, an association of artists.

The Binding of Isaac