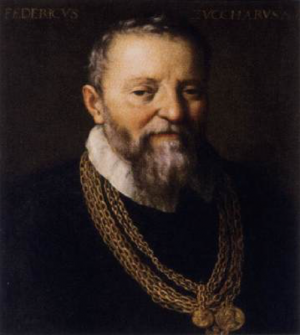 Federico Zuccari, also known as Federico Zuccaro (c. 1541 – August 6, 1609), was an Italian Mannerist painter and architect, active both in Italy and abroad.

Zuccari was born at Sant’Angelo in Vado, near Urbino (Marche).

His documented career as a painter began in 1550, when he moved to Rome to work under Taddeo, his elder brother. He went on to complete decorations for Pius IV, and help complete the fresco decorations at the Villa Farnese at Caprarola. He was involved in the following fresco projects:

Pucci Chapel in the church of Trinità dei Monti, Rome

Another picture in the same collection appears to be a replica of his painting of the “Allegory of Calumny”, as suggested by Lucian’s description of a celebrated work by Apelles; the satire in the original painting, directed against some of his courtier enemies, was the immediate cause of Zuccari’s temporary exile from Rome. Zuccari was recalled to Rome by Pope Gregory XIII to continue in the Pauline chapel of the Vatican. He visited Brussels, and there made a series of cartoons for the tapestry-weavers. In 1574 he passed over to England, where he received commission from Robert Dudley, Earl of Leicester to portray himself and Queen Elizabeth.[2] He also painted Mary, Queen of Scots, Sir Nicholas Bacon, Sir Francis Walsingham, Lord High Admiral Howard.

He painted a portrait of a Man with Two Dogs, in the Pitti Palace (Florence), and the Dead Christ and Angels in the Galleria Borghese (Rome). In 1585, he accepted an offer by Philip II of Spain to decorate the new Escorial at a yearly salary of 2,000 crowns. He worked at the palace from January 1586 to end of 1588, when he returned to Rome. His paintings (like those of El Greco before him) were disliked by Philip II and many were painted over. However the parting was amicable:”We must not blame him, but those who sent him to us”, said Philip.[3] He was succeeded by Pellegrino Tibaldi. He there founded in 1595, under a charter confirmed by Pope Sixtus V, the Accademia di San Luca, of which he was the first president. Bartolomeo Carducci is said to have studied with him.
Like his Giorgio Vasari a generation before, Zuccari aimed at being an art critic and historian. His chief book, L’idea de’ Pittori, Scultori, ed Architetti (1607), was far less popular.

Zuccari was raised to the rank of cavaliere not long before his death, which took place at Ancona in 1609.

Healing of a paralytic