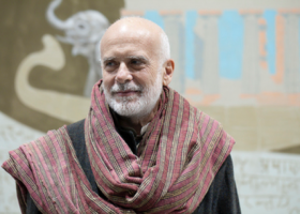 Francesco Clemente (born in Naples March 23, 1952) is an Italian contemporary artist. His work is influenced by thinkers as diverse as Gregory Bateson, William Blake, Allen Ginsberg and J. Krishnamurti. Dividing his time between New York and Varanasi, India, Clemente has adopted for his paintings a vast variety of supports and mediums, exploring, discarding, and returning to oil paint, watercolor, pastel, and printmaking. His work develops in a non-linear mode, expanding and contracting in a fragmentary way, not defined by a style, but rather by his recording of the fluctuations of the self.

In the 1980s he divided his time between India and New York. While briefly associated with Neo-Expressionism he took an interest in collaborative works both with Indian craftsmen and with painters like Basquiat and Warhol, and poets like Robert Creeley and Ginsberg in New York.

In the 2000s Clemente’s work went through a darker and grotesque phase, returning in the last years to luminous images of repose and transformation.

Since the 1980s until today Clemente also chronicled New York intellectual and social life through a great number of portraits, contributing to the revival of a genre until then somehow discredited.

Clemente’s art has been presented in solo and group shows internationally. Major retrospectives have been held in the 1990s at the Philadelphia Museum of Art, at The Royal Academy in London, at the Centre Pompidou, Paris and at the Sezon Museum of Art, Tokyo. Clemente’s art was also featured in 1999-2000 at the Solomon R Guggenheim Museum, New York, and at the Guggenheim Museum, Bilbao. In the 2000s retrospectives were held at the Irish Museum of Modern Art in Dublin, at the Museo MADRE, Naples and at the Schirn Kunsthalle, Frankfurt. An exhibition of self-portraits and of Clemente’s own version of the Tarot Cards was held at the Uffizi Gallery, Florence, in 2011.