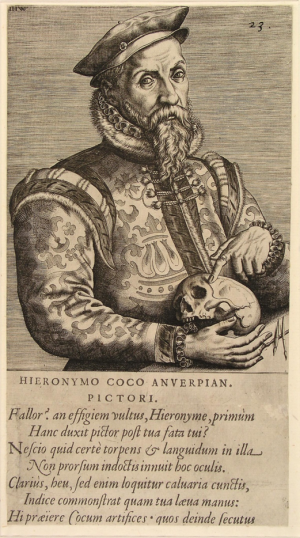 Hieronymus Cock, or Hieronymus Wellens de Cock (1518 – 3 October 1570) was a Flemish painter and etcher as well as a publisher and distributor of prints. Cock was the most important print publisher of his time in northern Europe and played a key role in the transformation of printmaking from an activity of individual artists and craftsmen into an industry based on division of labor.

He was born into an artistic family. His father Jan Wellens de Cock and his brother Matthys Cock were both painters and draftsmen. He was admitted to the painters’ guild of Saint Luke in Antwerp in 1545. He resided in Rome from 1546 to 1548. When he returned to Antwerp in 1548, he founded his own publishing house, Aux quatre vents or In de Vier Winden He issued his first prints there in 1548.

Cock’s enterprise played an important role in the spread of the Italian High Renaissance throughout northern Europe as Cock published prints made by prominent engravers such as Giorgio Ghisi, Dirck Volckertsz Coornhert and Cornelis Cort after the work of leading Italian painters like Raphael, Primaticcio, Bronzino, Giulio Romano and Andrea del Sarto. The Italian historian of architecture Vincenzo Scamozzi copied many of the engravings published by Cock in 1551 for his volume on Rome entitled ‘Discorsi sopra L’antichita di Roma‘ (Venice: Ziletti, 1583).

The majority of Cock’s prints were made after paintings by artists from the Low Countries such as Frans Floris, Pieter Brueghel the Elder, Lambert Lombard, Maarten van Heemskerck and Hieronymus Bosch. The series of landscapes were drawn from nature in the vicinity of Antwerp and had an important influence on the development of Flemish and Dutch realist landscape art.

He collaborated with the Spanish cartographer Diego Gutiérrez on a 1562 Map of America.

Hieronymus Cock collaborated with Antwerp architect and designer Cornelis Floris de Vriendt in publishing ‘’Veelderley niewe inuentien van antycksche sepultueren’’ (‘The many new designs of antique sculptures’) was published in 1557 and the ‘’Veelderley veranderinghe van grotissen’’ (‘Many varieties of grotesques’) in 1556. The publication of these books contributed to the spread of the so-called Floris style throughout the Netherlands.

The Dutch publisher Philip Galle worked at Cock’s printing house from 1557 and succeeded him in 1570.

At his death in 1570 he left behind the most prominent print publishing establishment in Europe north of the Alps. His widow continued the publishing house until her death in 1601. In 1572 she published a book by Dominicus Lampsonius called Pictorum aliquot celebrium Germaniae inferioris effigies (Effigies of some celebrated painters of Lower Germany), a set of 23 engraved portraits of artists with short verses in Latin printed below them. Hieronymus Cock had been working on this publication at the time of his death.