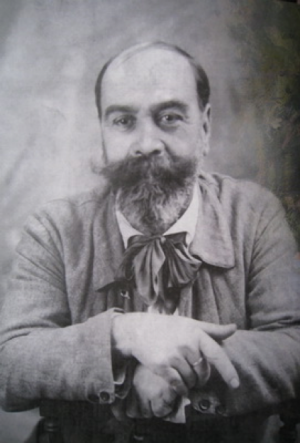 Joaquin Mir Trinxet (6 January 1873 – 1940) was a Catalan artist. Living through a turbulent time in the history of his native Barcelona, he was known by the color of his paintings. They helped to define the Catalan art movement known as modernisme.

Mir studied at the Llotja before joining the Colla del Safrà group with Canals, Nonell and Pichot. Working in isolated circumstances in Mallorca, Mir painted odd landscapes in which forms and chromatic colors merged. In his first exhibition in Barcelona in 1901, the critical reviews were positive but the public found his paintings difficult to comprehend. He started in Mallorca a solitary artistic process, full of colors without forms, which finished when he suffered an accident in 1905.

In 1913 he returned to more realistic positions, receiving recognition for his work. From this period, his paintings tended to become more mystic, more abstract, and highly colored evocations of nature rather than topographical scenes. Among the artists he met in this period of his life, and who influenced him, were Laureà Barrau, Santiago Rusiñol, Eugène Carrière, Pierre Puvis de Chavannes, and Ignacio Zuloaga.

He was one of the rare Spanish painters of the period who did not continue his artistic education in Paris. But he visited regularly Casas and Rusiñol, which lived together at the Moulin de la Galette in Montmartre, along with painter and art critic Miquel Utrillo and the sketch artist Ramon Canudas.

He had not the same influence from the French impressionists as Casas. The style that would become known as modernisme had not yet fully come together, but the key people were beginning to know one another, and successful Catalan artists were increasingly coming to identify themselves with Barcelona as much as with Paris.

Mir Trinxet contributed several murals to Casa Trinxet after his trip to Majorca with Santiago Rusiñol, where he met the mystic Belgian painter William Degouve de Nuncques in 1899, and before his move to Reus.

“All I want is for my works to lighten the heart and flood the eyes and the soul with light.” This was how Mir Trinxet summed up his private art manifesto in 1928.

Color and light meant everything to Mir, and he used them to build a personal idiom in which he created a surprisingly modern oeuvre, beyond the art movements like Impressionism or Symbolism with which critics have often sought to associate him. Although his artistic development varied between realism and abstraction, two features crop up throughout his entire output: the urge to establish a new vision of nature and an unremitting search for beauty marked by genuine creative tension.
Mir Trinxet painted landscapes in Tarragona and Majorca (perhaps his best known works, and certainly the ones that contributed most to create the myth of the artist that merged with nature and lost himself in a delirium of light and color). He also produced works during his campaigns in places like Andorra, Montserrat, Miravet and Gualba.