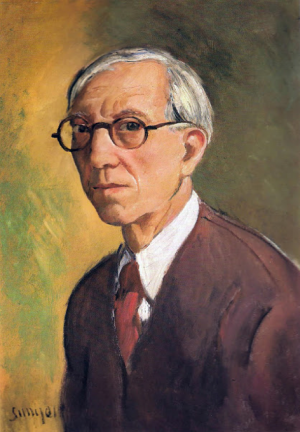 Joaquim Sunyer (Sitges, 1874–1956) was a Catalan painter often linked to the Noucentisme movement.

He began his artistic education with his uncle, and later moving to Barcelona where he studied with such painters as Joaquin Torres Garcia, Isidre Nonell and Joaquim Mir.

In his youth he moved to Paris, where he became acquainted with the neo-impressionist movement and worked extensively in the style. After returning to Catalonia he travelled to Italy before finally establishing himself in Sitges, his hometown. There he painted numerous landscape paintings in which he highlights his preoccupation with capturing the Mediterranean light through the use of very light colors marking a clear rupture with his darker paintings executed in Paris. His compositions are noted as an example of balance, though sacrificing technical perfection for the benefit of a more intense evocative power.