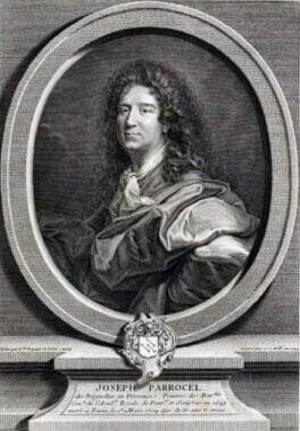 Joseph Parrocel (3 October 1646 – 1 March 1704) was a French Baroque painter, best known for his paintings and drawings of battle scenes.

His elder brother Louis, who was already established as a painter in the Languedoc, took him under his care and gave him a training as painter. Three years later he ran away from his brother’s house to Marseilles.. His talent as a painter became soon noticed and he got a commission for a number of paintings.

He left for Paris and stayed there for four years, perfecting his skills. He then returned to the Provence and continued his journey to Italy, where he would stay for eight years. In Rome he became the pupil of Jacques a famous painter of battle scenes who was also known as “le Bourguignon” or “il Borgognone”. He also studied the works of Salvator Rosa. Joseph Parrocel worked with him in his workshop and was thoroughly influenced by him, even if he gave his style later a more French touch.

He settled in Paris in 1675 and earned himself a reputation. He was accepted as an elected member at the Académie Royale de Peinture et de Sculpture on 29 February 1676 and he became an academician on 14 November 1676 with his admission piece “Siege of Maastricht”. In 1703 he became a councilor at the Academy. As a member of the Academy, he would obtain royal commissions. However the French Secretary of State for War, the Marquis de Louvois recognized the talent of Parrocel and gave him the commission to paint one of the dining halls of Les Invalides in Paris with scenes of conquest by Louis XIV. This was appreciated and led to further prestigious commissions to decorate the Château de Marly and the Palace of Versailles.

He is best known for his heroic battle scenes but painted also landscapes, historical pieces and religious works, such as “The temptation of St. Peter in the desert” (1694). He also produced paintings for the church “Notre-Dame des Victoires”, the Hôtel de Soubise and the Hôtel de Toulouse, all in Paris. In 1700 he painted “The Fair at Bezons”, a precursor of the fêtes galantes of Antoine Watteau. He was also one of the first to paint hunting scenes.

His differed from his contemporary academician Adam Frans van der Meulen by being more original and vivid in his execution. He applied broad, nervous layers with dazzling movements, using intense colours.

During his lifetime he produced more than 90 prints engravings, many of which are in the Louvre, Paris.