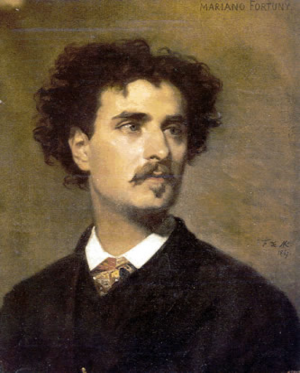 Marià Fortuny i Marsal (June 11, 1838 – November 21, 1874), known more simple as Marià Fortuny or Mariano Fortuny, was a Catalan painter. His brief career encompassed both the Romantic fascination with Orientalist themes, and a prescient loosening of brush-stroke and color.

He was born in Reus, in Catalonia. Thus, Marià was raised by his grandfather, a cabinet-maker who taught him to make wax figurines. At the age of 9, at a public competition in his town a local painter, teacher and patron, Domènec Soberano i Mestres, encouraged further study. At the age of 14 he moved to Barcelona with his grandfather. The sculptor, Domènec Talarn, secured him a pension allowing him to attend the Academy of Barcelona (La Llotja school of art). There he studied for four years under Claudi Lorenzale and Pau Milà i Fontanals, and in March 1857 he gained a scholarship that entitled him to two years of studies in Rome starting in 1858. There he studied drawing and grand manner styles, together with Josep Armet i Portanell, at the Academia Giggi.

In 1859, he was called by the Council of the Province of Barcelona (Diputació de Barcelona) to depict the campaigns of the Spanish-Moroccan War. He went to Morocco from February to April of that year, making sketches of landscapes and battles, which he showed in Madrid and Barcelona when he returned. These would later serve him as preliminary sketches for his monumental piece, The Battle of Tetuan (La batalla de Tetuan, 1862-64, Museu Nacional d’Art de Catalunya).

Since the days of Velázquez, there had been a tradition in Spain (and throughout Europe) of memorializing battles and victories in paint. On the basis of his experiences, Fortuny was commissioned by the Council of the Province of Barcelona to paint a large canvas diorama of the capture of the camps of Muley-el-Abbas and Muley-el-Hamed by the Spanish army. He began his composition of The battle of Tetuan on a canvas fifteen metres long; but though he worked on and off on it during the next decade, he never finished it.

The greater influence of this travel on Fortuny was his subsequent fascination with the exotic themes of the world of Morocco, painting both individuals and imagined court scenes. He visited Paris in 1868 and in 1870 was followed by a two years’ stay at Granada, but then he returned to Rome, where he died somewhat suddenly on November 21, 1874 from an attack of tertian ague, or malaria, contracted while painting in the open air at Naples and Portici in the summer of 1874.

Fortuny paintings are colorful, with a vivacious iridescent brushstroke, that at times recalls the softness of Rococo painting but also anticipates impressionist brushwork, Fortuny’s recollection of Morocco is not a costume ball, but a fierce, realistic portrait which includes bare-chested warriors.

Fortuny often painted scenes where contemporary life had still not shaken off the epaulets and decorations of ancient traditions such as the ‘’Burial of a matador’’ and couples signing marriage contracts (La Vicaria). Each has the dazzle of bric-a-bracornament, but as in his painting of the ‘’Judgement of the model’’, that painterly decorative air of Rococo and Romanticism was fading into academicism and left to confront the naked reality of the represented object. He inherited Goya’s eye for the paradox of ceremony and reality.