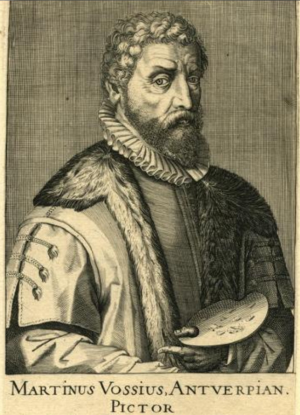 Maerten de Vos, Maerten de Vos the Elder or Marten de Vos (1532 – 4 December 1603) was a Flemish painter mainly of history paintings and portraits. He became, together with the brothers Ambrosius Francken I and Frans Francken I, one of the leading history painters in the Spanish Netherlands after Frans Floris’ career slumped in the second half of the sixteenth century as a result of the Iconoclastic fury of the Beeldenstorm.

De Vos was a prolific draughtsman and produced numerous designs for the Antwerp printers.

Maerten de Vos was principally a painter of religious scenes. He was also an accomplished portrait painter. In the 1580s he produced multiple designs for prints and book illustrations. Beginning with Mannerism, his style evolved to become clear and descriptive, which perfectly corresponded to the ideas of the Counter-Reformation.

De Vos was a very prolific ‘inventor’ and his large output was popularized and widely disseminated through engravings made by Raphael Sadeler, Wierix brothers and others.

De Vos also made designs for the Antwerp publishers Plantin Press. These included designs for the Breviarum Romanum and the Missale Romanum. He also designed the illustrations for the ‘Triumphus martyrum’, a series of 13 prints showing martyrs of the Old Testament. Other publications on which he worked included series on the five senses, the seven deadly sins, the Christian virtues, the 12 months, the four seasons and the seven wonders of the world. De Vos provided 78 drawings for the illustrated Bible Thesaurus veteris et novi testamenti published in 1585 by Gerard de Jode. The export of this illustrated Bible by de Jode, as well as its publication in Amsterdam in a revised edition, contributed to the popularity of de Vos’ illustrations throughout Europe.

De Vos’ drawings are known for their lively and generally positive character. Romantic Italianate landscapes appear often in the background. His obvious proficiency led to a certain degree of routine formularization.