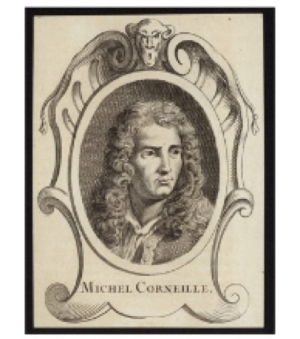 Corneille was the son of an artist, Michel Corneille the Elder of Orléans, and on this account is sometimes called the “younger Michel”. He is also and more commonly known as the “elder Corneille” (Corneille l’Aîné), to distinguish him from a younger brother, Jean-Baptiste Corneille, also a painter. His father was the first and the most indefatigable of his teachers; his other masters were Pierre Mignard and the celebrated Charles Le Brun. Devoting himself wholly to historical painting, Michel won the Academy Prize and went to Rome on the king’s pension; but feeling his genius hampered by the restrictions of the prize, he gave up the money so that he might study the antique in his own way. Coming under the then powerful influence of the Eclectics, he studied with the Carracci and modeled his style on theirs. In 1663 he returned to Paris and was elected a member of the Royal Academy, his picture on entering being “Our Lord’s Appearance to St. Peter after His Resurrection”. In 1673 he became an adjunct, and, in 1690, a full, professor in the Academy.

Corneille painted for the king at Versailles, Meudon and Fontainebleau, and decorated in fresco many of the great Paris churches, notably Notre-Dame, the church of the Capuchins, and the chapel of Saint-Grégoire in the Invalides. His style, reminiscent of the old masters, is the conventional style of the Eclectics; his drawing is remarkably careful and exact, the expression on the faces of his religious subjects is dignified and noble, the management of chiaroscuro excellent, and the composition harmonious, but suggestive of the Venetian School. From his insufficient knowledge of the composition of pigments, the color in many of his pictures has suffered such a change that it is today disagreeable; but the artist possessed a good color-sense, and contemporary records go to prove that his color was refined and pleasing.

He etched and engraved over a hundred plates in a bold and free style, for he was a master of the line; but he subsequently spoiled the effect by too much and too precise work with the engraver. A dishonest dealer put Raphael’s name on some of Michel Corneille’s plates, and for a long time no one disputed their attribution to the great master. For many years Corneille resided at the Gobelins Manufactory, and was sometimes called “Corneille des Gobelins”.

Among his paintings are a “Repose in Egypt“, and a “Baptism of Constantine“. Among his more important etched and engraved works are: “The Nativity”; “Flight into Egypt”; “Abraham journeying with Lot” (wrongly ascribed to Raphael), and “Jacob wrestling with the Angel“, a plate after Annibale Carracci.