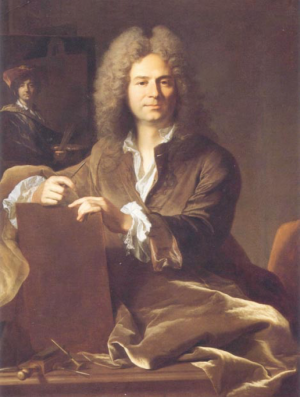 The Drevet Family were leading portrait engravers of France for over a hundred years. Their fame began with Pierre, and was sustained by his son, Pierre-Imbert, and by his nephew, Claude.

Pierre Drevet, the Elder (1663–1738) was born at Loire-sur-Rhône in the Lyonnais,  the son of Estienne Drevet, and began his studies with Germain Audran in Lyon, continuing them with Gérard Audran  in Paris. His progress was rapid, and in 1696 he was made court engraver. In 1707 he was admitted to membership in the Académie des Beaux-Arts, his reception piece being an engraving of Robert de Cotte.

Hyacinthe Rigaud’s portraits were in high favor at the end of the seventeenth century and Drevet was the first to encounter the difficulties of translating into black and white the natural appearance of texture and materials in the latter’s oil paintings. Always engraving after oil-paintings, Drevet was at times uneven, but this was arguably because the originals were uneven. His engravings were mainly the portraits of distinguished people. Among his many plates are a portrait of Jean-Baptiste Colbert (1700); portraits of Louis XIV (for this etching, he was named ‘King’s engraver’) and Louis XV, both after Rigaud; a Crucifixion, after Coypel, and a portrait of Charles II of England. During the last years of his life Drevet worked with his son and they produced plates together. He died in Paris.