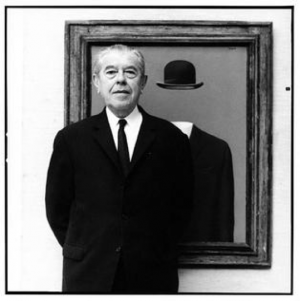 René François Ghislain Magritte (21 November 1898 – 15 August 1967) was a Belgian surrealist artist. He became well known for a number of witty and thought-provoking images. Often depicting ordinary objects in an unusual context, his work is known for challenging observers’ preconditioned perceptions of reality.

Magritte’s earliest paintings, which date from about 1915, were Impressionistic in style. From 1916 to 1918, he studied at the Académie Royale des Beaux-Arts in Brussels,  under Constant Montald, but found the instruction uninspiring. The paintings he produced during the years 1918–1924 were influenced by Futurism and by the figurative Cubism of Metzinger.. In 1922–23, he worked as a draughtsman in a wallpaper factory, and was a poster and advertisement designer until 1926, when a contract with Galerie ‘Le Centaure’ in Brussels made it possible for him to paint full-time. In 1926, Magritte produced his first surreal painting, The Lost Jockey (Le jockey perdu), and held his first exhibition in Brussels in 1927. Critics heaped abuse on the exhibition. Depressed by the failure, he moved to Paris where he became friends with André Breton, and became involved in the surrealist group. The illusionistic, dream-like quality is characteristic of Magritte’s version of Surrealism. He became a leading member of the movement after leaving his native Belgium in 1927 for Paris, where he stayed for three years.

During the German occupation of Belgium in World War II he remained in Brussels, which led to a break with Breton. He briefly adopted a colorful, painterly style in 1943–44, an interlude known as his “Renoir Period”, as a reaction to his feelings of alienation and abandonment that came with living in German-occupied Belgium. In 1946, renouncing the violence and pessimism of his earlier work, he joined several other Belgian artists in signing the manifesto Surrealism in Full Sunlight. During 1947–48, Magritte’s “Vache Period”, he painted in a provocative and crude Fauve style. During this time, Magritte supported himself through the production of fake Picassos, Braques and Chiricos -a fraudulent repertoire he was later to expand into the printing of forged banknotes during the lean postwar period. This venture was undertaken alongside his brother Paul Magritte and fellow Surrealist and ‘surrogate son’ Marcel Mariën, to whom had fallen the task of selling the forgeries. At the end of 1948, he returned to the style and themes of his prewar surrealistic art.

Popular interest in Magritte’s work rose considerably in the 1960s, and his imagery has influenced pop, minimalist and conceptual art.