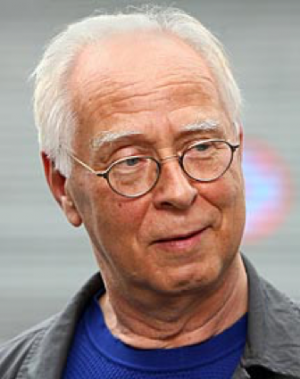 Polke experimented with a wide range of styles, subject matters and materials. In the 1970s, he concentrated on photography, returning to paint in the 1980s, when he produced abstract works created by chance through chemical reactions between paint and other products. In the last 20 years of his life, he produced paintings focused on historical events and perceptions of them.

He fled with his family to Thuringia in 1945, during the expulsion of Germans after World War II. His family escaped from the Communist regime in East Germany in 1953, traveling first to West Berlin and then to West Germany Rhineland.

Polke began to worked as an apprentice in a stained glass factory in Düsseldorf between 1959 and 1960. From 1961 to 1967 he studied at the Düsseldorf Arts Academy under Karl Otto Götz, Gerhard Hoehme and deeply influenced by his teacher Joseph Beuys.

In 1963, Polke founded the painting movement “Kapitalistischer Realismus” with Gerhard Richter and Konrad Lueg. It is an anti-style of art, appropriating the pictorial shorthand of advertising. This title also referred to the realist style of art known as “Socialist Realism”, then the official art doctrine of the Soviet Union and its satellites, but it also commented upon the consumer-driven art “doctrine” of western capitalism.

Returning to painting in the 1980s, he maintained his interest in alchemical properties. He began to make large, gestural paintings which combined figurative and abstract imagery. During the 1980s he experimented with materials and chemicals, mixing together traditional pigments with solvents, varnishes, toxins and resins to produce spontaneous chemical reactions. These experiments produced elaborate abstract paintings which reflect on the concepts of originality and authorship which underpin the Modernist tradition and, in particular, the mystique of American Abstract Expressionism.

Through his numerous high-profile exhibitions, Polke exerted an international influence, affecting somewhat younger artists such as his compatriots Martin Kippenberger and Albert Oehlen, Lara Schnitger from the Netherlands, the Americans Richard Prince, Julian Schnabel and David Salle, , and the Swiss duo Fischli & Weiss. The artist John Baldessari described Polke as an “artist’s artist”. Today, Polke is often grouped with Gerhard Richter because both came of age and experimented in West Germany in the 1960s.