Bob Dylan as a visual artist

Long before Bob Dylan was awarded the Nobel Prize in literature this year, pundits used to talk about “Dylan versus Keats”, as if you had to choose, and as if Dylan’s poetic transformations of folk song are really so different from what John Keats does in his eerie ballad La Belle Dame sans Merci.

When it comes to Dylan’s art, the dice fall differently. Dylan versus John Constable would make no sense, for when it comes to drawing and painting it’s as plain as a Brooklyn ice cream parlor that Bob Dylan is a bluff old traditionalist.

He draws and paints what he sees, although in his latest and impressive show at London’s Halcyon Gallery you feel that what he sees is always subtly merging with an America in his mind. Sometimes that inner America seeps out. A crowd of midwesterners gawping at a fairground sideshow that offers a peep into a “Harem” – surely this has come from Dylan’s dreams? Yes, most of the time, with true observation and patient work, he records reality in all its strangeness. 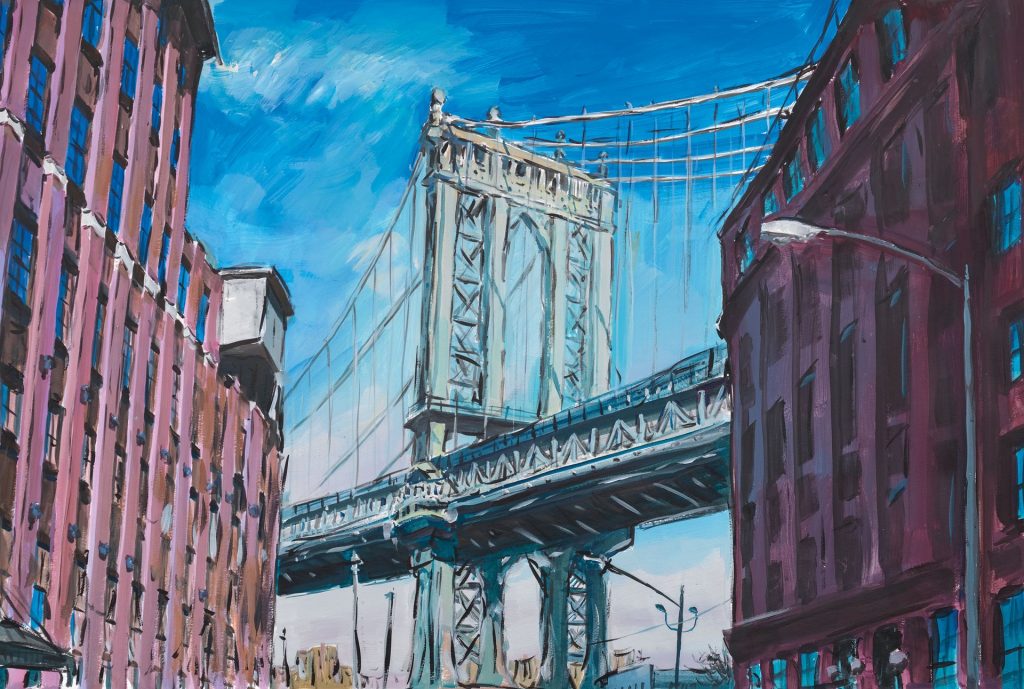 Dylan comes along and sketches your car because he likes it parked there outside some fast food joint. He paints a knish and bagel shop, and the blue and yellow light inside it, and the graffiti along the street. He looks up and paints the vastness of skyscrapers, the glory of Manhattan Bridge, or a burning desert sky.

This guy can look. His drawings are intricate, sincere, charged with curiosity. He has a living, loose line that stops them descending into mere pedantry. Life astounds him. Most of his sketches are of places on the edge of town or on run-down corners, the fading, interstitial essence of America: coffee shops, drive-ins, all-nite venues. Myth haunts these stage sets of American stories and songs, yet they are secretive and  mysterious. They are seen from outside by an artist who does not try to learn more or less than his eyes tell him.

Is it right to call Dylan an artist at all? The Halcyon Gallery, on New Bond Street among some of London’s glossiest designer shops, is exactly the kind of glitzy joint you might expect to see some celebrity’s self-indulgent art. Is Dylan doing any more than pursuing a hobby? Oddly enough, the night before his Nobel Prize was announced, I attended an event where a critic launched an unprovoked attack on Dylan’s visual art, going on about how awful it supposedly is. In reality it is hard to see how anyone can dislike the evocative pictures of America in Dylan’s new show – unless you loathe pictures, and think painting, that old thing, should be banned.

If you dismiss David Hockney and Robert Crumb and believe only Avant-garde conceptual art has value, you won’t like Dylan’s landscapes. Yet if you do admire either of those meticulous artists, there is no reason to look down on Bob Dylan just because he happens to be a rock star. He has a surprising amount in common with Hockney. His art looks more serious with every exhibition. He is turning into a hero for anyone who thinks drawing is a noble thing to do.

What really sets his latest show alight, though, is when he expands his sketches into huge paintings in drunken abandon to the power of color. Purple skies, lurid neons, wet greens and fierce reds – the colors of Dylan’s landscape are subtle, rich, with just a hint of apocalypse.

A real artist made these drawings and paintings. Their integrity is compelling. They demand to be looked at, for their awe and wonder at the beauty and grandeur of being alive. These are the pictures of a true poet.