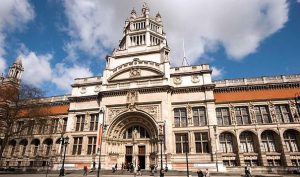 The V&A has confirmed that Martin Roth, its German director, is to leave his role this autumn after five years, a decision hastened by his disillusionment over the British vote to leave the EU.

The London museum said Roth will devote more time “to various international cultural consultancies” as well as his wife Harriet and their children in Berlin and Vancouver.

The Guardian understands (see the edition on 5 September 2016) that Roth had always intended to stand down in the next year but two factors seem to have played a decision in the timing. One was the Brexit vote, which he was profoundly against. The other was the V&A winning the 2016 museum of the year, which meant he could leave on a high.

In interviews with the German broadcaster DW, Roth said the vote to leave the EU felt like a “personal defeat” and he had been particularly upset to hear aggressive “war rhetoric” during the referendum campaign.

Roth had been passionate in his views on Brexit and the tone of the debate. In one interview he said: “What happened to tolerance, solidarity and charity? And I’m not a dreamer. I’m just talking about basic values – manners that are part of our upbringing and connect us. Where are they now?

“That doesn’t just go for England. The same thing is happening in France with [Marine] Le Pen, and in Germany with the AfD party. A ‘me-first’ mentality has suddenly started to spread – and it is brutal.

“I can understand that people ask: how should we deal with Brussels? But it seems crazy to me that this question should lead to smashing everything else. It is destroying the future of our children. That’s sad. A majority of older people have voted for the Brexit, while the younger generation wants to remain in the EU. That means the elderly have stolen the youth’s future.”

The museum recorded a record 3.9 million visitors last year and plans to expand operations to Scotland, east London and China. That was another reason, sources said, for it being a good time for Roth to move on.

Roth commands an enormous amount of respect in the museum world. Stephen Deuchar, the director of the Art Fund –and chair of the judging panel that named the V&A museum of the year- said Roth would be a great loss to the UK arts scene. He said: “The V&A’s international programme and profile has developed markedly under Martin Roth’s leadership and I very much hope his departure is not, as has been speculated, a consequence of the profoundly dispiriting referendum decision. The potential cultural consequences of Brexit, alongside the economic, are deeply worrying.”

John Kampfner, chief executive of the Creative Industries Federation, said he was sad to see Roth leave the V&A “where he has been among a number of great Europeans to have contributed to the strength of Britain’s arts and creative industries in recent years.

“It would be a terrible worry if senior figures from across Europe were to be deterred from working in this country by the EU referendum result.”

The board of trustees is to begin a search for Roth’s successor. Its chairman Nicholas Coleridge said: “Martin’s tenure as director has been marked by a highly successful period of creativity, expansion and reorganisation of the V&A. He has made a significant contribution to the success of this museum, and the trustees are immensely grateful for all that he has achieved here. “We are starting the process of looking for someone to take on the role and are fortunate to have an exceptional team in place to lead its activities and help build its future with the new director.”

Roth was appointed in 2011, becoming the first foreign director of the V&A since it was founded in 1852. He previously worked at the Dresden State Art Collections. He always saw himself as a European.

The Brexit results are a very bad news for Great Britain and Europe, especially in the cultural field. It’s a real disaster, in terms of open-mind, adaptability, cultural exchange and the future of the exciting European project.