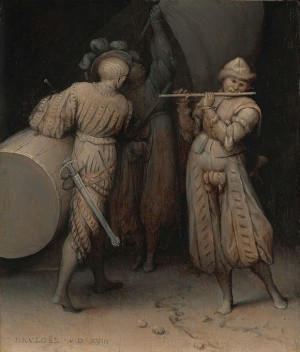 It will soon be Fat Tuesday. Eggy batter will sizzle heartily in pans across the land. One of modern Britain’s last lovely echoes of pre-industrial life, our pancake festival on the last Tuesday before Lent is a homely relic of the great carnivals that once rocked every village in Europe, releasing laughter and communal joy, and flipping the whole world upside down.

The art of Pieter Brueghel the Elder preserves that lost age of carnival in plump rollicking pictures that overflow with life. In his 1567 painting The Battle Between Carnival and Lent, a village square explodes into subversive fun. Masked revellers, dice players, dancers and drinkers let it all hang out. Broken eggshells litter the ground as a cook heats up an iron skillet to cook the next batch of pancakes. Brueghel is riotous, generous, and Shakespearean in his appetite for the whole of human life.

Yet he also has a Lenten side. The Battle Between Carnival and Lent is not quite the simple ode to boozing, eating and questioning the social order of Renaissance Europe that it first appears. As the title implies, it is a struggle between two phases of the Christian ritual year, between two states of being. The thin grey figure of Lent, under whose sway meat will be banned and everyone must fast and purge, jousts listlessly against a chubby personification of Carnival. It looks like no contest, but once the empties are collected and the eggshells swept away, Lent will begin.

The Courtauld Gallery’s new exhibition of Brueghel (Brueghel in Black and White: Three Grisailles, until 8 May) is certainly Lenten fare. It has no cakes or ale. Instead it revels – literally – in the dark side of this well-loved artist, bringing together three “grisaille” paintings by Brueghel, small pictures in black and white whose restricted palette suits their sombre themes.

Christ and the Woman Taken in Adultery (1565), which belongs to the Courtauld, is modelled like a painted sculpture: Brueghel uses his stony colours to create the effect of a tragic monument. Three Soldiers (1568), lent by New York’s Frick Collection, is a slighter work but touches on one of Brueghel’s most disturbing themes. The soldiers are accurately dressed as mercenaries like the ones he saw parading and fighting in the Netherlands as war began with the region’s Spanish rulers. 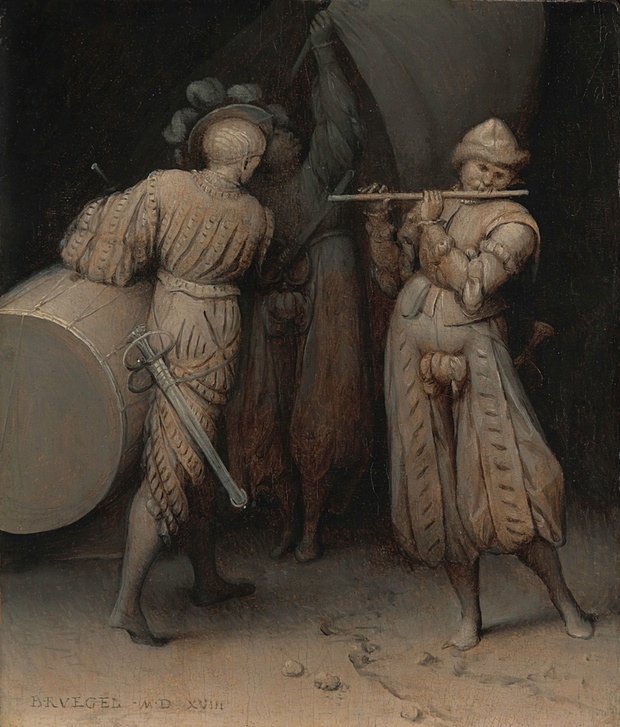 In his chillingly real version of The Massacre of the Innocents, the world is turned upside down horribly, as soldiers ride into a Netherlands’ village to slaughter the first-born. It would have been nice to see the painting, which belongs to the Royal Collection, in this show. Instead we get copies of Brueghel’s black-and-white works by lesser artists, including his descendants. But this does raise interesting thoughts.

Brueghel was an artist who worked equally in painting and printmaking. The prints here show how the “high” art of painting and the popular industry of print-selling intertwine for him: his black-and-white paintings are, in effect, painted engravings. Working with print, Brueghel sees the positive power of black, its eerie authority. He uses it to truly devastating effect in his great painting The Death of the Virgin (c1562–65), lent to this show by the National Trust from its usual home in Upton House, Warwickshire.

A woman lies dying in a bed lit by candlelight, and by the Holy Spirit. All around the bed is darkness, punctuated by a tiny candle and the waning flames in the fireplace. Another woman keeping vigil has gone to sleep. The disciples gather in the shadows. Any death might be as moving as this one. What makes the painting so powerful is Brueghel’s enveloping blackness. Light and darkness, death by night – it is harrowing. It is also revolutionary. In this moving masterpiece, Brueghel anticipates another artist’s shadows. This is a Rembrandt painted years before Rembrandt was born.

It makes what is otherwise a somewhat slight exhibition worthwhile and there is more sustenance for anyone a bit starved by this brief encounter with Brueghel.