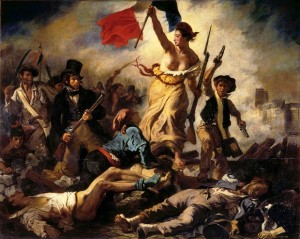 Eugène Delacroix today holds, for many people, a somewhat peripheral place in the pantheon of 19th-century artists. That he was a powerful influence on the likes of Manet, the impressionists and Seurat is taken for granted, but so too is the idea that they went on to outstrip him. For the poet and art critic Charles Baudelaire, however, such a reversal of reputation was inconceivable. Delacroix, in his eyes, was peerless. In his review of the Salon exhibition of 1845 he stated startlingly and unequivocally: “M Delacroix is decidedly the most original painter of ancient or modern times. That is how things are, and what is the good of protesting?”

What made him such an original was not just his artistic range – from crucifixions to portraits to tigers to vast mythological ceiling paintings – and the fluidity of his colour and drawing, but his personality. Delacroix, said Baudelaire, was “a volcanic crater artfully concealed behind bouquets of flowers” and as fascinating for his enigmatic aloofness as for his art. His contemporaries also saw in this Anglophile dandy someone who remained stubbornly and defiantly true to himself despite the disdain of officialdom and the brickbats that were frequently directed at his work from the academy. His indifference and determination to survive outside critical and state support were, for younger painters, inspirational.

This admiration for the person as much as the painter was tangible. Odilon Redon recalled stalking Delacroix at a ball in 1859 and overhearing him being introduced to a Bonaparte princess who wanted “to see a great artist”: “You see,” countered Delacroix, “he’s not very big.” In physical stature perhaps not – he had life-long ill health and a bit of a stoop – in every other way though successors viewed him as a giant. “We all paint in Delacroix’s language,” said Cézanne. “That bastard. He’s really good,” grudgingly admitted Picasso – not a man who willing acknowledged having equals.

The impressionists, post-impressionists, pointillists, symbolists, expressionists and modernists all drew on Delacroix. The individual artists that owe him a debt form an impressive roster: Van Gogh, Gauguin, Seurat, Signac, Fantin-Latour, Redon, Monet, Cézanne, Whistler, Manet, Gustave Moreau, Matisse, Picasso and more. As do the writers, among them Stendhal, Gautier, Proust and Henry James. He was the heir to a type of grand, public art that had been prevalent since the Renaissance. The critic Lorenz Eitner called Delacroix “the last great European painter to use the repertory of humanistic art with conviction and originality”. He was the preeminent religious and mythological painter of the 19th century and he almost never depicted the modern world – and when he did, he painted it as allegory. When once praised enthusiastically as the quintessential Romantic artist, he responded: “You are mistaken sir, I am a pure classicist.”

And an another example, his painting Women of Algiers was a sensation at the Salon and harbinger of a slew of “harem” pictures by lesser artists which coarsened Delacroix’s vision of art for art’s sake. Here, mood and beauty of form, rather than narrative, are paramount, producing what he called “the music of painting”. Cézanne was among the younger artists for whom the picture was a revelation: “All this luminous colour – it seems to me that it enters the eye like a glass of wine running into your gullet and it makes you drunk straight away.” The picture later obsessed Picasso who painted 15 variants and drew and etched almost 60 more.