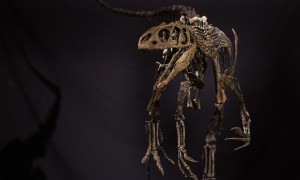 Today’s dinosaurs’ sale (yes, you can buy them at auction) for a predicted £500,000 proves that we’re criminally underpaying for our ancient wonders – and even more criminally overpaying for modern art.

Certainly, if you want proof the art market is mad, consider the difference in price between dinosaurs and the most expensive contemporary art, since Jonathan Jones was writing recently in an interesting article in the newspaper ‘The Guardian’ (25 November 2015).

That’s right, dinosaurs – they can actually be bought at auction.

A fossilised Allosaurus skeleton went under the hammer today at Summers Place Auctions in West Sussex (UK). This juvenile specimen of the most lethal predator of the Jurassic age, discovered in Wyoming in 2009, was expected to fetch up to £500,000 – a price in line with other dinosaur skeletons: in 2005, the same auctioneers sold a diplodocus for £400,000.

The main buyers of dinosaur bones are museums. A year ago the Natural History Museum in London unveiled a beautiful Stegosaurus, back plates and all that it bought for an undisclosed sum with help from a hedge fund manager.

Glamorous auctions, private sales, hedge fund managers, half a million quid – it all sounds like the art market. Yet there is one big difference.

Half a million is mere pocket money for many art collectors. Let’s consider the prices paid for recent art (without even thinking about the world records constantly being set and broken for modern masters such as Picasso and Modigliani, for example Modigliani’s Reclining Nude sold for $170.4m at Christie’s in New York, recently): £2.5m for Tracey Emin’s Bed? That’s nothing – a Peter Doig painting can go for up to £16.6m. Damien Hirst’s notorious 2008 auction earned him more than £111m.

There’s no point in being angry about this. The cash-earning magic of modern art is a given – and one of the mysteries of 21st-century economics. The reason the comparison with dinosaur prices is telling, however, is that surely many of us, if we had the money, would rather own a dinosaur than a Hirst.

I know I would. How amazing, to have a natural wonder in your home. Indeed, what stops an allosaurus being sculpture? If conceptual art has taught us anything, it is that museums are themselves colossal artworks, their displays of wonders rooted in the cabinets of curiosities of Baroque Europe that mixed science, art, magic and the exotic. Surely, collectors who are interested in contemporary art ought to see that a stunning natural history exhibit is just as wonderful – if not more so? Why aren’t they pushing the price of dinosaurs into the tens of millions?

There can only be one reason, and it tells us everything about the art market. People don’t pay for a work of art; they pay for the name. We are addicted to the idea of artistic genius. Collectors are the most addicted of all. Picasso’s signature makes even his lesser daubs stupendously valuable. Gerhard Richter’s name can sell works that otherwise might leave collectors baffled. It is the signature of genius that sends prices escalating.

That’s why a dinosaur does not attract the big money. If collectors really did buy what they loved, many of them would buy dinosaurs instead of Warhol. Luckily they prefer the Warhol, and the marvels of the Jurassic are still just about affordable by museums.