Joan Miró and José Guerrero produced prints at Atelier 17, the New York workshop of Stanley William Hayter: Miró in 1947 and Guerrero shortly after his arrival in America.

Guerrero’s prints of this period -monotypes and etchings with aquatint- betray the influence of Hayter and the wider vogue for biomorphic abstraction in America, for which Joan Miró’s work of the mid-1920’s through the 1940s stood as a basic reference.

The British born Stanley William Hayter had traveled to Paris in 1926 and established his Atelier 17 in this City seven years later. Known for his innovative techniques -Hayter would later develop a complex simultaneous multicolor printing method- and for encouraging artists to engage with all of the printing process, Atelier 17 was frequented by Alexander Calder, Jacques Lipchitz, Pablo Picasso, Roberto Matta, Joan Miró and the Americans David Smith and John Ferren, among others. 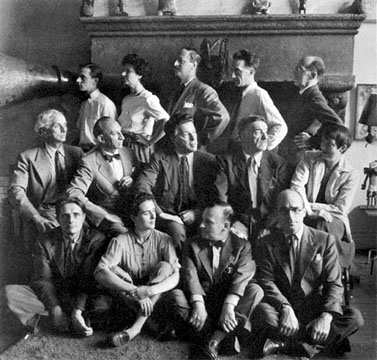 With the Fall of Paris, in the Second World War, and with support from art’s collector Peggy Guggenheim, Hayter moved his studio to New York City in 1940. Atelier 17 became a meeting place for artists of the emergent New York School who were closely tied to Guggenheim: William Baziotes, Jackson Pollock, Willem De Kooning, Robert Motherwell, Adolph Gottlieb and Mark Rothko. Pollock, for example, executed eleven engravings at the Atelier between the autumn of 1944 and the spring of 1945, and the Atelier was featured in an exhibition at MoMA (Museum of Modern Art) in 1944, with a catalogue by none other than Sweeney. Prints by Miró, Lipchitz, André Masson and Marc Chagall were included in the exhibition. Although Hayter returned to Paris in 1950 the workshop continued to operate in New York until 1955. In this sense, it’s very interesting and illustrative to see the book, “The Prints of Stanley William Hayter. A Complete Catalogue”, by Peter Black and Désirée Moorhead and edited by Mount Kisco, New York, Moyer Bell Ltd., 1992.

Among Hayter’s innovations was the use of unusual materials to create novel textural effects. For example, Guerrero’s prints of c.1950-51 are ‘period pieces’ in which a vocabulary of biomorphic forms with radiating lines, and boomerang shapes with etched geometric designs contained within their contours, are superimposed or distributed across black grounds. In a number of works in this series it appears that Guerrero used burlap and other rough surfaces to create rich textures, such that the prints have a collage-like effect. Guerrero’s sources range from the biophormic forms of Hans Arp, Vasily Kandinsky and Will Baumeister to the more strident geometries of members of the Abstraction-Création group that was active in Paris in the 1930s, and the American Abstract Artists group centered in New York.

The use of textural elements, which also looks back to Miró’s groundbreaking work in collage of 1929, in turn forecast the artist’s exploration of materiality in his portable murals of the early-mid 1950s. Miró’s activities in Hayter’s studio in 1947 have been eclipsed by his work on a large mural for the roof garden of the Terrace Plaza Hotel in Cincinnati (Ohio).