Gauguin and the Noa Noa Prints 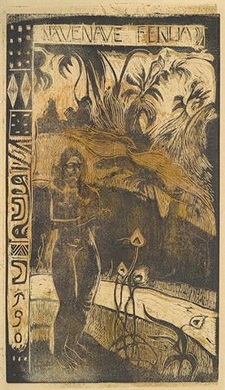 In 1891 the French Symbolist painter and engraver Paul Gauguin journeyed to Tahiti (in French Polynesia), aiming to live simply and draw inspiration from what he saw as the island’s exotic native culture.

Although he was disappointed by the rapid process of Westernization of the local community he encountered (in any case, a common reaction among American and European visitors of that time), his works from this period nonetheless celebrate the myth of an untainted Tahitian idyll, a myth he freely helped perpetuate upon his return to Paris in 1893.

That fall, he wrote Noa Noa (“Fragrant Scent“), a largely fictional account centered on his immersion in the spiritual world of the South Seas. To illustrate it, Gauguin turned for the first time to the woodcut medium, creating a suite of ten dark, brooding images he intended to publish in tandem with the text, a publication that never materialized.

Through its combined sense of immediacy (in the apparent directness of the printing process) and distance (through the mechanical repetition of motifs), the woodcut form offered Gauguin the ideal means to depict a paradise whose real attraction lay in its being always just beyond reach. Many essays explore the notion that the Noa Noa prints allowed Gauguin to convey a deeply Symbolist conception of his Tahitian experience while continuing to experiment with the reproductive processes and other technical innovations that absorbed his mind and hand during the 1890s.

Concretely, throughout February and March 1894, Gauguin engraved, gouged, and carved his wood-blocks in a self-consciously primitive manner and began pulling proofs by hand, without the aid of a press. With these proofs, he abandoned any idea of consistently printing the woodcuts as an edition, choosing instead to experiment with various monotype techniques to ink and color the blocks, thereby producing a series of works in which no two impressions were alike. Printed mostly in shades of black and brown with selected color accents, the woodcuts differ markedly from the vibrant canvases Gauguin previously had painted in Tahiti and suggest a significant new phase in his development. When his innovative methods proved to be impractical for publication, he hired the Breton artist Louis Roy, with whom he had associated in Pont-Aven, to print the woodcuts in thick black ink on heavy Japanese paper and use stencils to apply abroad areas of bold color.

In the late spring or early summer of 1894, Gauguin left Paris for Brittany, where he produced, among other works, a series of pastoral watercolor monotypes and side-grain color woodcuts that reflected on some of the themes explored in the Noa Noa suite. Eventually, after extensive text revisions, the poet and critic Charles Morice managed to publish sections of Noa Noa in the literary and artistic journal La Revue Blanche in 1897, followed by a complete edition in 1901. But theses appeared without Gauguin’s approval.

Although Noa Noa never materialized in the form Gauguin had originally proposed, his woodcuts enjoyed a widespread independent notoriety; they survive today not only as his collective printmaking masterpiece but also as one of the most innovative print series produced in the 19th century.