Impressionism and the Caribbean 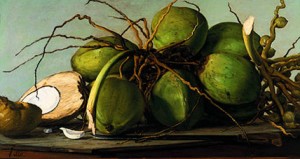 In the 19th century, Modernism traveled the world, and one of the places it flourished was in Puerto Rico, where the painter Francisco Oller was born in 1833. He had his initial art training in San Juan, then went abroad for further study in Spain and France. In Paris, he fell in with avant-garde artists who favored Courbet-inspired realism and a brand-new style, Impressionism. He painted side by side with Claude Monet and introduced Camille Pissarro, another Caribbean native, to Paul Cézanne. Unlike Pissarro, though, Oller didn’t stay in Europe. He returned to Puerto Rico, then still a Spanish colony, and made life there the theme of his art in landscape paintings of sugar plantations and still-lifes of tropical fruit.

The exhibition “Impressionism and the Caribbean: Francisco Oller and His Transatlantic World”” which it will opens at the Brooklyn Museum on October 2, until January 3, 2016, assembles 84 of his pictures and surrounds them with work by earlier Puerto Rican artists and Oller’s famed French contemporaries. By demonstrating that Oller was at once avidly cosmopolitan and proudly provincial, and valuable for being both, the show pushes global art history forward another step.

But, who was Francisco Oller? Francisco Manuel Oller y Cestero was born in Bayamón, Puerto Rico, the third of four children of arisocratic and wealthy parents Cayetano Juan Oller Fromesta and María del Carmen Cestero Dávila. When he was eleven he began to study art under the tutelage of Juan Cleto Noa, a painter who had an art academy in San Juan, Puerto Rico. There, Oller demonstrated that he had an enormous talent in art and in 1848, General Juan Prim, at this time Governor of Puerto Rico, offered Oller the opportunity to continue his studies in Rome. However, the offer was not accepted as Oller’s mother felt that he was too young to travel abroad by himself.

When Oller was eighteen, he moved to Madrid, Spain, where he studied painting at the Royal Academy of Fine Arts of San Fernando, under the tutelage of Federico de Madrazo Kuntz, director of the Prado Museum. In 1858, he moved to Paris, France where he studied under Thomas Couture. Later he enrolled to study art in the Louvre under the instruction of Gustave Courbet. During his free time, Oller, who had a baritone type of singing voice, worked and participated in local Italian operas. He frequently visited cafés where he met with fellow artists. He also became a friend of fellow Puerto Ricans Ramón Betances Alacán and Salvador Carbonell del Toro, who were expatriates in France because of their political beliefs. In 1859, Oller exhibited some of his artistic works next to those of Bazille, Renoir, Monet and Sisley.

For a short time, Paul Cézanne was one of Oller’s students, although their professional relationship deteriorated with time. Oller was known at this time as the first Puerto Rican and Hispanic Impressionist artist. In 1868, he founded The Free Academy of Art of Puerto Rico.

In 1884, he founded an art school for young women which was later to be known as the Universidad Nacional. In 1871, Spain honored Oller by naming him a member of the Orden de Carlos III and a year later he became the official painter of the Royal Court of Amadeo I. Oller developed an interest in bringing out the reality of Puerto Rico’s landscape, its people, and culture through his works of art. Oller’s paintings can be found in museums worldwide, including the Louvre.

Oller was a prolific painter with works ranging in topic from still-lifes and landscapes to historical events and portraiture. While he was involved with several painting movements, Realism, Naturalism and Impressionism and; he is best known for his Impressionist works.