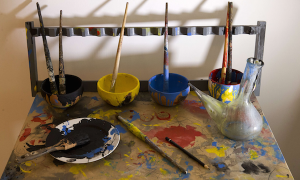 Great art needs to be hungry?

First there was Euro Disney, and then there was Legoland. Now comes a new kind of European theme park for art lovers – a recreation in London of the surrealist Joan Miró’s studio, complete with biomorphic dodgems, a political rollercoaster and mirrors that make you look like a line, a dot and a star.

Well, not quite. In fact Miró’s Studio is basically just an art exhibition. Mayoral gallery in St James’s has “recreated” the studio that Miró had built for himself in Mallorca in the 1950s. The Catalan architect Josep Lluís Sert was behind Miró’s grand design – a big, luminous, private space where Miró worked happily and fruitfully until his death in 1983. Yet far from a postmodern simulacrum of Sert’s coolly adventurous architecture (he and Miró had been friends since Sert designed the Spanish Pavilion at the 1937 Paris International Exhibition, for which Picasso painted Guernica), this is a tasteful homage.

At the back of the gallery there’s a reproduction of a stone wall that gave the modernist studio a rustic touch. Miró’s collections of seashells, photos, newspaper clippings and a Punch-like puppet are spread around the place to suggest – along with pencils and, of course, brushes – the creative, poetic, fantastical atmosphere in which Miró worked in his final decades. There’s even paint splattered on the floor in the primary colors that dominate his late works.

This colorful installation has the slight flavor of a very artful shop-window display. The real stars of this exhibition are choice examples of Miró’s later art, shown on easels or propped up with faux nonchalance as if they were still in his studio, freshly painted. What the gallerists have cunningly done is to create an alluring stage for works of art this modern master made in his prolific old age. But do they hold that stage with authority?

Miró lived way beyond the age of surrealism in which his art had taken shape. He invented his revolutionary way of painting, in which he dredges enigmatic forms from the depths of his mind to create colored universes of inner space, a cosmos of sex and death, in Paris in the 1920s.

Why Miró is’s specially commissioned studio so important? You certainly can’t begrudge him the luxury. In an article he wrote about his longing for a big studio which is on view in a downstairs section telling the story of its creation, he reveals that when he moved to Paris as a young man he was so poor he only ate properly once a week, surviving the other days on nothing but chewing gum.

Looking at art as fantastical as Miró’s you may think it psychedelic, but his biographer Roland Penrose claimed hunger, not drugs, made the young Miró hallucinate. His studio was a reward to himself but also embodied a new way to think about art. Art got bigger after the Second World War – and it’s still expanding. In New York, the critic Clement Greenberg was calling from the 1940s for the end of the “easel picture” and its replacement by something more majestic and open in scale. Greenberg saw Big Art as inherently American, the “easel picture” as typically European. He championed Jackson Pollock. The grandeur of abstract expressionism was hailed as a new American age of European art. But Picasso with Guernica and Matisse in his cut outs had already shown the way to a more expansive idea of art. And Miró used his big new studio to create carnival puppets and murals that made his art a public and political gesture of freedom in the dark days of the Franco dictatorship.

The works in this exhibition are smaller examples of his late art – easel pictures and very nice ones too. The early art of Miró has a necessity in its lack of reason. It is genuinely hallucinatory. His later work is too abundant and too easily churned out. Why did Surrealism die? Perhaps because you can only have so many authentic dream images. Miró’s late work mattered when it was made because by choosing to live in Franco’s Spain while taking a dissident, libertarian stance, the artist did a huge amount to keep Spanish culture alive.

He is a hero of freedom and I can look at every last thing he created with huge pleasure and respect. But you can’t really claim his final works are as cutting edge as this exhibition wants them to be. Miró’s Studio is magical, but a bit too cosy. Maybe great art needs to be hungry.