Museums are part of the Britain’s north-south division? 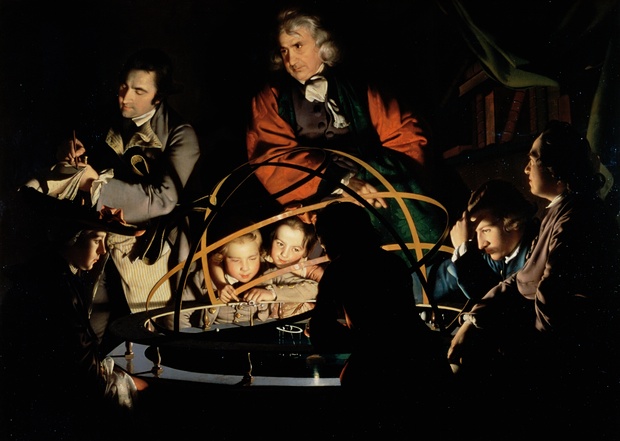 Joseph Wright of Derby, “A Philosopher Lecturing on the Orrery”, c. 1766

Joseph Wright of Derby’s painting this piece, “A Philosopher Lecturing on the Orrery” may look familiar for British people. It often appears on book covers, regularly flashes up in TV documentaries, and with good reason. No painting captures the wonder of science better.

Adults and children are gathered by candlelight around a brass model of the solar system, learning about astronomy from some unknown Brian Cox of the 18th-century Midlands. Painted in about 1766, it is a defining image of the Enlightenment and one of the greatest works of art ever created in Britain.

Wright’s great image of science hangs, along with many other superb paintings by this artist who worked at the centre of the industrial revolution, in Derby Museum and Art Gallery. But as cuts from central government are passed down by councils across Britain to the museums sector, will it continue to hang there? As cultural heritage becomes one of the softest targets for financial cuts, Derby’s three museums – Silk Mill, Derby Museum and Art Gallery and Pickford’s House – may be forced to reduce their opening hours or close altogether if the Council withdraws funding to the trust that runs them.

If you think this does not matter much, if you safely assume that all Britain’s real masterpieces are in places like the British Museum and that regional galleries are also-rans, think again. Derby alone has the best collection of Wright’s paintings in the world. His Orrery, not to mention his atmospheric nocturnal scene of industrialist Joseph Arkwright’s mill, are national treasures that all happen to be owned by Derby’s museum. If the museum closes, what will happen to these paintings?

Make no mistake, this is a cultural crisis. Museums across Britain are filled with fascinating and important works of art whose fate now hangs in the balance as galleries face closure or Councils contemplate selling off masterpieces in their collections. It has already happened to an Egyptian masterpiece owned by Northampton Council. By the logic of the market, the better the work of art, the more danger it will be sold to raise cash.

Yet this crisis is not evenly spread. For example, if you see Bath’s situation. This small but historic city has museums of architecture, fashion, interior design, science and literature, as well as the lovely Holburne Art Museum, and they all appear to be flourishing. That’s because Bath feeds happily on its history, and proudly offers visitors a chance to explore the world of Jane Austen or the eccentric Druidic beliefs behind its Georgian architectural masterpieces.

A quick glance at a map will tell you something else about Bath: it’s in the south. Museums across this affluent part of England tend to have fine restaurants, refurbished galleries and highly publicised acquisitions. Oxford’s Ashmolean has expanded so much it is now branded as a “national” rather than regional institution, with major exhibitions. Nor is the Fitzwilliam in Cambridge likely to close any time soon.

A north-south divide is opening up. While Bath delights Austen enthusiasts, Lancashire is closing its mill museums and Derby may lose a home for its Wrights. Can you see what that means? The British history, the British collective memory, is being distorted. England is becoming two nations and it is the rich southern nation that owns and shapes history. George Osborne, Chancellor of the Exchequer, may want his northern powerhouse, but his department’s spending cuts are, culturally, creating anything but.

Industrial revolution. What industrial revolution? Britain is the country of green fields and landed estates, of gentry portraits and Etonian prime ministers. There was a guy called Wright who painted a different story, but all his pictures appear to have vanished somehow.