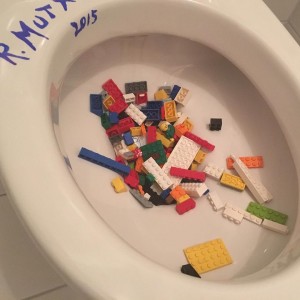 Chinese dissident artist Ai Weiwei says Danish toymaker Lego has refused his studio’s request for a bulk order of the plastic toys on political grounds. In an Instagram post on Friday 28th October evening, the artist said Lego had refused the bulk order in September, quoting the company as saying it “cannot approve the use of Legos for political works”.

The artist’s accusation follows news this week that British firm Merlin Entertainments will open a Legoland park in Shanghai in conjunction with a Chinese partner. That announcement, timed to coincide with Chinese president Xi Jinping’s state visit to the UK, seems to have prompted the artist’s Instagram post.

The latest bulk order by the artist would have been used to create an artwork to be shown at the National Gallery of Victoria in Australia later this year.

It is not the first time the toymaker has met with political controversy. Earlier this year, the company refused journalist Maia Weinstock’s submission to its “Lego Ideas” platform of a custom set which celebrated the female justices of the US Supreme Court.
An earlier major exhibition of Ai Weiwei’s work, held inside Alcatraz island penitentiary in the San Francisco bay, featured works made out of the plastic construction toys. The piece, titled Trace, showed pixelated images of more than 175 prisoners of conscience including Nelson Mandela, Edward Snowden and Nobel prize-winning Chinese dissident Liu Xiaobo.

The real reason is that the Danish toymaker is expanding its presence in China as growth in the US – its biggest market – has slowed. In September, the company reported that Asia provided the highest regional growth rate. The company has also invested a “three-digit million euro figure” into a new manufacturing facility in Jiaxing, to help keep up with the regional demand. The artist said Lego told him “they cannot approve the use of Legos for political works” and he later called the decision “an act of censorship and discrimination”.

But, the reaction is open and Chinese dissident artist Ai Weiwei has been inundated with Lego brick donation offers after the Danish toy maker refused your request. The refusal prompted an outcry on social media, with many offering their own Lego blocks to complete his installation, some using the hashtag #legosforweiwei.

The artist took to Instagram a picture of a toilet filled with the toy blocks and signed “R. Mutt 2015” – a reference to Marcel Duchamp’s 1917 “Fountain” – accompanied the post.

Other users played on the artist’s own work, expressing their defiance by extending their middle fingers at Lego stores, or making the gesture out of Lego bricks. In the past, a series of photographs by the artist featured him giving the middle finger in front of the White House, Tour Eiffel or Tiananmen Square.

Lego spokesman Roar Rude Trangbæk said: “Any individual person can naturally purchase or get access to Lego bricks in other ways to create their Lego projects if they desire to do so, but as a company, we choose to refrain from engaging in these activities – through for example bulk purchase.” “In cases where we receive requests for donations or support for projects – such as the possibility of purchasing Lego bricks in large quantities – where we are made aware that there is a political context, we therefore kindly decline support.”

In fact, Nordic stupidity combined with Chinese discrimination and censorship