Paul Durand-Ruel, the champion of the Impressionists 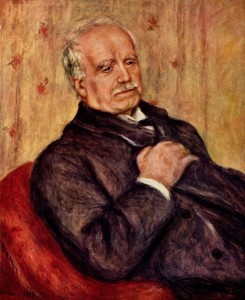 What was the role of the gallerist and art dealer Durand-Ruel in the promotion of the Impressionist painters in the latter decades of the 19th century? He was, really, a champion of the early years of the financial, organizational and cultural forces that made art a particularly prized commodity, so even as one admires the acumen and passion of the man at the center of the movement, you can’t help but think: Here is where it all started, the nascence of the art world we know today, with all its excesses, its fanatical worship of prices and record-setting auctions and its devolution into triviality and vulgarity.

Durand-Ruel, who inherited a family shop that once sold paper, and then expanded to art supplies, built an international business using speculation, buying art in bulk, taking loans to do so, promoting his artists’ careers through new media, and vertically integrating his business by bringing creators into his direct employ. His apartment, where some of the greatest masterpieces of the day were displayed, also doubled as a museum open to the public and a social space for dinners and gatherings, a precursor of the public-private trophy spaces characteristic of so much of the high-end art world today.

The difference between ¬Durand-Ruel and the people who still ply his trade using many of the techniques he pioneered is simple: The great Parisian dealer, through whose hands thousands of impressionist works once passed, cared passionately about the artists he promoted and the work they made. And he took personal risks to do so, courting critical opprobrium in the early years and bankruptcy more than once as he strove to stay afloat in the Balzacian chaos of 19th-century French economic life.

Monet, like several of the artists Durand-Ruel championed, was effusive in his assessment: “He persisted, stubborn, risking bankruptcy twenty times in order to back us. The critics dragged us through the mud, [but for him it] was even worse! They wrote, ‘These people are crazy but a dealer who buys their work is even crazier!’”

The dealer was by no means exclusively interested in the Impressionists, and he was also a major conduit in the trade of older paintings, including works by El Greco, Goya and Rembrandt. But it is with his introduction to Monet and Pissarro and his discovery of Manet in 1872 that Durand-Ruel comes into his own as a dealer.

And, for example, after seeing two Manet works in the studio of another artist, Durand-Ruel bought 26 paintings by the artist; a bold move given that Manet at the time was more infamous than bankable. Manet was a transitional painter, not an impressionist in the sense of Monet or Pissarro, but each of his works functions like a little explosion. There is the case for a daring nautical scene, a still life (“The Salmon”) with a strong historical resonance, a haunting moonlight vignette and “Boy with a Sword,” and a striking portrait against a flat, brown background that recalls Manet’s fascination with Velazquez.

The market was beginning to determine taste in a much more thorough-going way than in earlier eras, and you can easily detect painters struggling with a problem that has become crippling for many artists today: How to stand out, how to create a brand and how to do both without losing your soul.
Among Durand-Ruel’s techniques for promotion were solo or monographic exhibitions, which wasn’t just a matter of celebrating an artist’s importance, but also inviting visitors, critics and potential collectors more deeply into his individual aesthetic. Monet was given an exhibition in 1883, with nearly 60 works on display, and none sold. It’s hard today, with Monet part of the visual background chatter of the world, to see Monet afresh…

And also it’s important to know the ¬Durand-Ruel’s promotion (with the help of Mary Cassatt) of impressionism in the United States, and another recalling an important overview exhibition mounted in London at the Grafton Galleries in 1905. In this year, money was raised to buy a Monet for the National Gallery in London, but the gallery trustees refused it, opting instead for Boudin’s much less interesting landscape…

Durand-Ruel, who was a monarchist and deeply traditional Catholic, doesn’t emerge as a warm, fuzzy figure, but he was clearly devoted to the artists he championed and often gave them direct financial support and ¬moral encouragement.