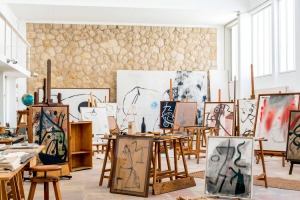 In 1938, the Catalan artist Joan Miró, then 45, was living a precarious existence in Paris, moving from one insufficient studio to the next. His situation was scarcely better than it had been in Catalonia, where he had painted “in tiny cubicles where I could hardly turn around,” he wrote that year in “I Dream of a Large Studio,” an essay for a French art review.

The studio that Miró eventually built, nearly two decades later on Majorca, was central to his evolution as an artist. There, in his 60s, 70s and 80s, he freed himself from the bright and neat geometric patterns of his earlier work, placing canvases flat on the floor and then splashing paint onto them with brooms and brushes or applying it with fingertips and fists.

On the 60th anniversary of the studio’s 1956 opening, Mayoral, a Barcelona art gallery, is recreating it in London, in a space complete with replicas of the eclectic objects scattered around it, as well as 25 works by Miró, many of which will be for sale, according the article published by Raphael Minder (on January, 8) in The International New York Times.

The London show is part of a surge in interest in Miró. A dozen exhibitions are scheduled worldwide from now to 2018, including two shows that include re-creations of the Palma studio, at the Villa Manin near Venice, Italy, and at the Cobra Museum in the Netherlands. A separate exhibition at the Joan Miró Foundation in Barcelona, “Miró and the Object”, examines his relationship to everyday items like the ones in his studio and how he used them as vehicles to move away from traditional painting.

Rosa Maria Malet, the director of the foundation, said there was a new appreciation for the artist’s versatility: “I think there was a period, especially in the United States, when Miró was appreciated for the agreeable dimension of his art, for the poetry of his colors and his aesthetic,” she said, “but now we’re becoming more aware that there are a lot more aspects to Miró.”

Miró painted in his studio until two years before his death, in 1983 at the age of 90, and today the studio remains the way he kept it.

The show will include copies of correspondence between Miró and the architect Josep Lluis Sert, a friend and fellow Catalan whom Miró commissioned to design the studio.

Sert, later the dean of the Graduate School of Design at Harvard and the designer of the Miró Foundation building in Barcelona, was living in the United States, having fled Spain after the Spanish Civil War. “Miró was getting his dream studio, but having it made by an architect who was in exile, and that of course didn’t make things easier,” said Jordi Mayoral, who with his two siblings helps run the gallery, which was started by his parents.

Miró was eager to return to Majorca, where his mother’s family had lived and where he spent childhood vacations. In 1929, he married a Majorcan woman, Pilar Juncosa.

When he got the keys to his new studio, he was so overwhelmed at the thought of starting a new artistic chapter that he decided to burn about 80 percent of the works that he had shipped to Palma from Barcelona. However, Miró set himself to his task, building up a body of work that by his death amounted to about 2,000 paintings and 500 bronze sculptures.

The Sert studio is part of the Miró foundation in Majorca, which includes a museum and another studio that the artist added in 1959, when he bought an adjacent 300-year-old house to allow him to work on larger canvases and sculptures. The house’s former stables were turned into a lithography printing shop, where artists in residence continue to work.

The Barcelona exhibition, shows Miró at his most versatile, both as a painter and sculptor, in works that are often far removed from the controlled style he is known for. Early collages incorporate “anti-artistic” materials like chipboard and scrap metal, and by the late 1960s, Miró was lacerating and stabbing through some canvases — or hammering nails into them — to get viewers to look beyond the surface of paintings.

“Miró is not just about bright and delicate colors, because there is also a brutalist side to his work,” Ms. Malet of the foundation in Barcelona said.