A profile of the elusive Art Collector 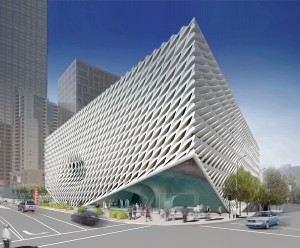 The Broad planned museum in Los Angeles. Credit The Broad and Diller Scofidio + Renfro in collaboration with Gensler

This migratory species regularly congregates in Switzerland in June, in Britain and France in October, and in Italy every second summer. More recently, it has gathered in Hong Kong in the spring. Generally black in plumage, and most frequently seen in habitats with bare white walls, contemporary art collectors have proved elusive subjects for systematic study.

But now the Hong Kong-based website Larry’s List, which has been compiling data on wealthy international art buyers since 2012, has come up with some numbers. Its first report, published this month, estimates that there are 8,000 to 10,000 collectors worldwide who regularly buy substantially priced works from contemporary galleries and from fairs like Art Basel, Frieze and the FIAC.

“Collector” is a catchall term encompassing a wide range of “connoisseurial” and financial activity. In the case of the Larry’s List “Art Collector Report 2014,” the term covers high- and ultrahigh-net-worth individuals — those with a minimum of $1 million in cash at their disposal — who are active buyers of contemporary art and who possess a significant number of works.

The website had 3,111 such “visible” collectors in its database recently, with an estimated further 7,000 or so also active in the market, some keeping the lowest of low profiles. It said the figures were based on publicly available data from more than 27,000 individual sources.

“Collectors are much more influential than they were 20 years ago and that influence is increasing,” said Magnus Resch, the German-born co-founder of Larry’s List. “More collectors are opening their own spaces and taking a leading role in museums, influencing the direction they take. They’re also pushing up the auction prices of their favorite artists.”

“Good idea, but no,” said Mr. Resch, 30, a London School of Economics postgraduate who, with his co-founder, the curator and author Christoph Noe, also from Germany, manages a team of 25 art market researchers in 20 countries. “We didn’t want to call it ‘Research Something or Other.”’ “We wanted to call it something more fun,” he added, seemingly surprised that anyone would make the Gagosian connection.

The average age of a collector is 59; men make up 71 percent of the sample. The United States has 25 percent of the world’s contemporary art collectors, by far the largest proportion, followed by Germany with 8 percent and Britain and China with 7 percent each. Switzerland, the home of Art Basel, the world’s biggest contemporary art fair, does not feature in the report’s top 10 collecting nations, nor does Russia.

“Switzerland has a huge collector base, but it isn’t visible,” Mr. Resch said. “These guys just don’t talk about their collections.” Wealthy Russians are equally non-communicative about that subject, at least to the compilers of art market reports.

According to Larry’s List, the number of private contemporary art museums is increasing. There are now 350 of them in 46 countries. The United States leads the way with 48; Germany has 45; and China 17, with six in Beijing alone.

Tax breaks in the United States and Germany, and some other countries, have encouraged collectors to build museums that are accessible to the public, though notions of accessibility can vary wildly. The Broad, in Los Angeles, that will showcase the private collection of the billionaire Eli Broad, is probably 2015’s most grandiose example. It is scheduled to open in the fall.

But collectors also become involved in museums, either private or public, because they want the chance to buy the most desirable new art. They are aware that commercial galleries give preferential status to collectors who show works to the public.

“It’s one of the reasons why I’m with my museum,” said François Odermatt, a contemporary art collector in Montreal, where he is one of the partners and a major exhibitor at the public Arsenal gallery. “It gave me great access to amazing works from dealers.”
Larry’s List, like so many market analysts, views China as the main growth nation. “Collectors will create the next art superstar who will come from China,” says the report, despite its own data showing a continuing reluctance among Chinese collectors to buy international contemporary art.

The top 10 artists in collections in China are all homegrown, and Ai Weiwei — China’s lone international art superstar — is not on that list, which is headed by Zeng Fanzhi, ranked 61 globally, 60 places behind Andy Warhol. If Chinese collectors are going to anoint a new local-but-global art prodigy, they may have to internationalize their taste a bit.

But arguably the most significant of all the Larry’s List findings is the headline number of contemporary art collectors in the world.

Typically, high-net-worth individuals and ultrahigh-net-worth individuals are told by their financial advisers not to spend more than 5 percent of their net worth on so-called investments of passion. If we extrapolate the data of the art report, this means that as many as 10,000 people are spending a minimum of $50,000 a year on contemporary art.
Given that the most recent wealth report issued by Capgemini and RBC Wealth Management estimated the global number of people with a high net worth at 13.8 million, 10,000 is not a big number.

To be sure, history has shown that markets for art, particularly at auction, can be developed and inflated by a small number of individuals. But it is sobering to learn that today’s boom in the market for contemporary art is based on the spending habits of just 0.07 percent of those who can afford it.

Because they are relatively rare birds, the “true” collectors identified by Larry’s List — like Dakis Joannou, François Pinault and Mr. Broad — have a considerable, some might say disproportionate, amount of power.

“If people respect a collector and that collector buys an artist, it gives the artist credibility,” said the Hong Kong architect William Lim, one of four collectors profiled in the report. “But the collector has to act responsibly. Their choice is a stamp of approval.”