Current Destruction and Debate Over Repatriation of Antiquities 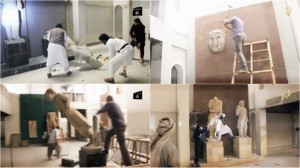 Assyrian relics that have stood for 3,000 years smashed and desecrated. Ruins from Babylonian times bombed and bulldozed. Scrolls and shrines ravaged from Somalia to Timbuktu…Museum directors, archaeologists, collectors and others with a fierce passion for safeguarding antiquities have been united in their disgust as Islamic militants make a show of ravaging artifacts from the ancient world.

But the devastation has also intensified a bitter debate over whether Museums, collectors and others should be returning disputed artifacts to the lands where they originated, a practice known as repatriation.

Gary Vikan, former director of the Walters Art Museum in Baltimore, said that given the violence in Iraq, Syria, Afghanistan and northern Africa, he believed museums should — and will — become more conservative about such returns: “I think this will put an end to the excess piety in favor of the repatriation model,” he said in The New York Times on March 30, 2015, in an article by Tom Mashberg.

Other scholars and most archaeologists have reacted harshly to that outlook, suggesting that those using the destructive spree by Islamic State extremists to lobby against repatriation want to justify discredited practices: “It was only a matter of time before some in the art-collecting community tried to turn this cultural nightmare to their own advantage,” said Ricardo J. Elia, an archaeologist at Boston University who believes the Western market for antiquities spurs the plundering of global archaeological sites.

Support for repatriation has gained ground in antiquities circles in recent years. UNESCO discourages museums and collectors from acquiring ancient objects if the items left their countries of origin after 1970. And more museums and art dealers are agreeing to send back poorly documented or disputed artifacts, items often obtained under lax practices.

Aimed at impeding archaeological smuggling by stifling demand, and at upholding the sovereignty of source nations, repatriation is enshrined in international treaties, embraced by some governments and hailed as the moral response to many decades when Western dealers and museums traded indiscriminately and sometimes lawlessly in global relics. Those who balk at the policy have been attacked as apologists for colonialism and cultural racketeering: “It has become an article of faith that any form of trade in cultural items is bad,” said Timothy Potts, an archaeologist and director of the J. Paul Getty Museum in Los Angeles.

But Mr. Potts and other antiquities experts say pillaging by the Islamic State, and by other radical groups, undermines that orthodoxy. Prominent among them is James Cuno, president of the J. Paul Getty Trust, which operates the Getty Museum. Known for his belief that important antiquities should be treated as the common property of mankind, Mr. Cuno has in recent months published an article arguing that wholesale repatriation threatens the cultural heritage of the very countries it supposedly benefits: “Calamity can happen anywhere, but it is unlikely to happen everywhere at the same time,” Mr. Cuno said in an interview. “I say ‘distribute the risk,’ not ‘concentrate it.’ ”

Even the mayor of London, Boris Johnson, spoke out, citing events in Iraq and Syria as reason enough to justify the removal two centuries ago of the Elgin marbles, which are now at the British Museum, from the Parthenon in Greece.

Those who support repatriation say they find it dispiriting to be re-engaged in a debate that many felt was largely won. Tess Davis, which favors repatriation, said Europe was engulfed in war last century, yet no one has argued, for example, that the Monuments Men should have kept the items they rescued during World War II because their safety in, say, France or Italy could not be assured: “Iraq might be the hot spot today, but there is no reason to think New York will not be one tomorrow,” said Ms. Davis, who has helped repatriate stolen Cambodian artifacts held by the Metropolitan Museum of Art, Sotheby’s and others. “The 3,000-year-old statues now threatened in Iraq have seen a lot of empires come and go.”

Alexander A. Bauer, an anthropology professor at Queens College, said he disagreed that the best response to events in Syria and Iraq was “to increase the collection of artifacts by the West à la the 19th century.” “This is a dangerous reaction, I think,” he said.

But Peter Tompa, a collector of ancient coins and a former vice chairman of the American Bar Association’s Art and Cultural Heritage Law Committee, said he agreed with a colleague who told him, “If the people of these lands are indifferent and even hostile to their ‘cultural heritage,’ what’s the point in reserving it for them to ignore or destroy?”

The Association of Art Museum Directors, which sets guidelines for some 250 members, urges museums to cooperate fully when their holdings are challenged. That makes Mr. Cuno something of an outlier for criticizing what he calls “frivolous restitution claims.” Mr. Cuno said foreign nations should instead agree to trades and exchanges that would allow Western museums to keep disputed antiquities rather than routinely return them.

That view is misguided and “neocolonialist,” said Allison E. Cuneo, a doctoral candidate in archaeology at Boston University who has worked in Iraq. The pivotal issue, she said, is documenting continuing losses and helping experts within afflicted nations “repair the damage to their own patrimony once the fighting is over.” Mr. Cuneo is familiar with such barbs…

Timothy Rub, director of the Philadelphia Museum of Art and former president of the art museum directors association, said acquisition scandals, including those involving the Getty before Mr. Cuno’s tenure, had put his peers on the defensive when it came to holding on to items. He added, however, that “there is a far greater awareness of the problem of trafficking in looted antiquities and the role that American museums can and should play in discouraging this.”