How build an Art Museum in Qatar… 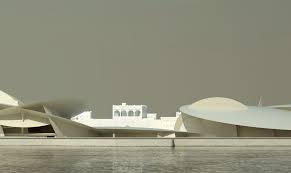 Sheikh Saud bin Mohammed al-Thani, a Qatari royal relative who was one of the world’s most prolific and idiosyncratic buyers of art, antiquities, jewelry, vintage cars and dinosaur fossils until corruption charges left him in debt, died on Nov. 9 at his home in London. He was said to be 48, though news media accounts have differed on his age over the years. Qatari culture ministry officials announced the death without giving a cause.

Sheikh Saud was appointed minister of culture, arts and heritage by Qatar’s ruling Thani family in 1997. The emir at the time, Sheikh Hamad bin Khalifa al-Thani, who financed the broadcast news organization Al Jazeera, is a cousin.

Sheikh Saud’s primary task was to draw on the emirate’s vast oil wealth to purchase enough fine art and other items of cultural significance to fill five showplace museums then being built in Doha, the capital, including one designed by I.M. Pei.

Known already as a private art collector of considerable appetite and discernment, he embarked on a buying spree over the next half-dozen years, spending an estimated $1.5 billion that made him a behemoth in the world marketplace of art and collectible objects.

He was courted by art dealers, auction houses and museum curators, and resented by competing collectors, who complained that his unlimited resources and single-mindedness inflated prices ludicrously. (In 2004, for example, he paid $1.35 million at auction for an antique jade-hilted Mogul dagger that was considered worth only one-tenth that amount.)

He described his approach to art-buying in a rare interview in 2004 with Georgina Adams for The Art Newspaper, which called him a “modern-day Medici”. “I go buy masterpieces,” he was quoted as saying. “Pieces from an important church, a major family, a great collection, these really interest me; they have a history and a provenance. You can get them in the best possible condition, and there are no problems of authenticity.” He added: “I don’t feel I have to compete for every object. But when a great work of art comes up for sale, it is never too expensive.”

Most sources say Sheikh Saud was born on Feb. 28, 1966, and educated in Doha before studying law at Beirut University. He joined the foreign ministry on his return. In its obituary, The Financial Times said his interest in the arts and cultural heritage began as a boy, when he collected stamps, and deepened when he joined a local photographic society and started buying prints.

The bulk of his purchases went to the five national galleries known collectively as the National Museum of Qatar, which opened to the public in 2008. He obtained Islamic art and metalwork, Koranic texts, jewelry, decorated weaponry, tiles and gold vases, Mamluk glass, manuscripts, photographs, pottery and more.

He also purchased things for himself while making acquisitions for the state: Western art, furniture, classic cars, bicycles, meteorites (“space sculpture” to collectors), three fossilized dinosaurs acquired in Wyoming, a complete edition of Audubon’s “Birds of America,” and the Graves Watch, a handmade gem known among collectors as the Holy Grail of timepieces, for which he reportedly paid $11 million in 1999.

Some of his purchases filled warehouses, floor to ceiling, at his desert estate outside Doha. “A statue from an English stately home stands next to a Benin bronze, while propped beside them is the third-century B.C. Roman glass bowl with tangent rings, one of the best pieces of Roman glass in the world,” The Art Newspaper reported. (He had turned his estate, Al Wabra, into an animal conservation center as well, breeding endangered wildlife.)

It was the lack of clear distinctions between his public and private purchases that led investigators in Qatar to charge Sheikh Saud in 2005 with misuse of public funds. He denied the charges, which were eventually dropped. But he spent several days in jail, and was forced to step down as culture minister.

And in 2012, a High Court judge in London froze $15 million worth of Sheikh Saud’s assets as part of a dispute over unpaid bills to auction houses. To pay the debt, he consigned the Graves Watch to Sotheby’s in Geneva. It was sold on Nov. 10, the day after he died, to “a man in a red tie,” according to a report in Express Online. The $20 million sale price was said to be a record.

As usual, lights and shades…