Let us meet in Canet-in-Roussillon? 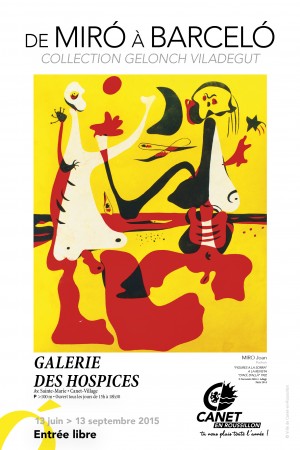 From June 13 to September 13 you will have the possibility to visit Canet-en-Roussillon (district of Eastern Pyrenees, France) and its “Galerie des Hospices” hosting the exhibition “From Miró to Barceló”, relying on the funds of the Gelonch Viladegut Collection.

The engravings gathered for this exhibition cover a period from the 1930s until today. Although a chronological classification would have allowed to mark some temporary clear milestones that would help to justify the notion of vanguard -an own concept of the previous century and that it would indicate that in the field of the artistic modernity a movement happens to follow the other-, the Commissioner of this exhibition has decided to organize the presentation around three thematic areas.

Why this choice? Because with the benefit of hindsight it is observed that -during this period in which the art has been more present that it had never been before, done to that the engraving has collaborated decisively-, the chronological conceptualization of the modernity also has its limits. Certainly, the works that cross the 20th century, those of the funds of the Collection that they present, show that the things are more complex enough. Because though some creations claim the break respect of previous works, other pieces, inversely, they mark very clearly your filiations, sometimes even of a cynical form, with the forms of the past.

Definitively, the history of the 20th century shows that everything is interconnected, and therefore, any attempt of classification turns out to be arbitrary. Then, consequently it is evident that the attempt of classification he has made is arbitrary. Certain works of some artists might belong to a category or to another one, which proves that the borders are very permeable.

Which are three blocks chosen to present the works? Here they are:

-“Beyond the real thing”, bringing together works that find your origin in the imaginary thing and in the unconscious one (surrealism, Cobra, abstract expressionism). You will able to admire pieces from Picasso, Karel Appel, Salvador Dalí, Max Ernst, Wifredo Lam, Henry Moore, Nancy Spero and Jan Voss, among others,
-“The pure way”, regroups authors’ works that are interested in the proper nature of the act, for the materiality across the colors, the forms and the drawing (minimalism, op art. matierism). It presents works, among others, by Josef Albers, Pedro Calapez, Eduardo Chillida, Antoni Clavé, Henry Matisse, Gerhard Richter and Victor Vasarely,
-“Reappropriation and detours”, which has interested in works finding their meaning in the recycling and in the overcoming of an iconography arisen from the history of the art or of a popular imagery that we see every day in the space surrounding us. We are speaking about works by Andy Warhol, Miquel Barceló, Francesco Clemente, Jim Dine, Manolo Millares, Sigmar Polke or Antoni Tàpies.

Well, some important pieces of the 20th century will be available for contemplation, as well as artist’s books of Joan Miró or of Josep M. Riera i Aragó, and the extraordinary “San Lazzaro and his friends”, that appears also projected in full screen. Here is a really unique opportunity for all the visitors to enjoy an immersion in the contemporary art.

This project has always benefited from the support of Mr. Bernard Dupont, Mayor of Canet-en-Roussillon, from the efficient contribution of Mr. Pascal Ferro, Commissioner of the exhibition, as well as of the whole personnel of the Youth and Culture’s Department of this City. I thank really all of them, especially for the rich and fructuous exchange of points of view that we have had.

On this occasion of this exhibition has been edited a catalogue and a video featuring dialogs by the collector. Also, some parallel activities have been programmed. Thank you in advance to all whose will contribute to or take part in these activities.

Then, with such a splendid program; shall we meet in Canet-en-Roussillon? Because, I love Canet all yearlong!