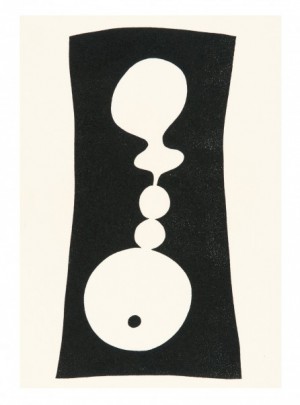 In the twentieth century, many of the most significant sculptors were also printmakers, several of them committed and prolific. While the comparatively flat surfaces of printmaking might not initially seem to offer much incentive to artists whose vision most naturally asserts itself in three dimensions, an examination of the range of printed images by sculptors during this period reveals that there is a distinct rapport between the two practices. Unlike drawings or studies for sculpture, prints are fully realized, independent works in their own right. Many sculptors look to printmaking for the pleasure or challenge of refracting ideas or problems through a new set of materials and techniques and for the opportunity to circulate their images and ideas more widely. For sculptors, who must necessarily conceive of abstract relationships between such spatial issues as mass, weight, and the formal and psychological effects of positive and negative shapes, printmaking offers a stimulating means of working out ideas prior to, in tandem with, or subsequent to what is usually the more arduous, time-consuming, and expensive process of casting, chiseling, or assembling sculpture.

It was not always this way. The history of printmaking from the fifteenth thought the nineteenth centuries is devoted nearly entirely to images by or after painters, and it yields almost no significant printed works by any major sculptor. The reasons for this may coincide with the inherently pictorial nature of two-dimensional imagery and the fact that printmaking, when it was not simply striving for clear-cut narration, was predominantly concerned with imitating the effects of painting or drawing. Early scholars and connoisseurs of prints, such as Giorgio Vasari in the sixteenth century and Adam von Bartsch in the nineteenth, emphasized and encouraged the work of painters. Although their purpose, or prejudice, was to celebrate the prints that were made by painters themselves over those executed by professional printmakers, the still-surviving model of the painter-printmaker excluded, by definition, any notion of a sculptor-printmaker.

The new attitude of sculptors towards printmaking is certainly related to modernism’s emphasis on materials and process, and its often-attendant disregard for pictorial or narrative content. The physical, tactile aspects of such techniques as woodcut, engraving, and etching have been investigated for their own sake, just as the formal aspects of materials have been isolated and elevated to the level of subject in sculpture. Indeed, one fundamental link between sculptors, who conceive of form not pictorially but spatially, and printmakers, who are traditionally restricted to the two-dimensional picture plane, is the intersection of materials and techniques involved in their two practices. Craftsmanship -the ability to skillfully and patiently carve, incise, or assemble a new object out of raw materials and a given set of tools- is an issue pertinent to both sculpture and printmaking. Historically, this correspondence manifested itself at least as far back as the seventh century, when the Chinese started making rubbings from carved stones or inking carved blocks of wood and printing them. When printmaking was first developed in Europe, around 1400, it was within the context of two late medieval crafts: woodcarving, which gave rise the woodcut, and goldsmithing, which led to engraving.

Technical collaboration -a legacy of the division of labor involved in many crafts- can also be integral to both sculpture and printmaking, with a sculptor working with a foundry or professional fabricators to realize his or her vision, and the printmaker relying on the technical expertise of professional printers in a workshop. The concept of making multiple copies from one matrix (usually, a woodblock, metal plate, or polished stone in printmaking; a cast, model, or prototype in sculpture) is also common to both mediums.