The US is a nation of compulsive collectors –at least if responses to an exhibition at New York City’s New Museum are anything to go by. The keeper is a collection of collections, a survey of the collecting passion in art and beyond that finds room for everything from a menagerie of tiny whittled animals made by Levi Fisher Ames of Wisconsin to Vladimir Nabokov’s collection of butterflies in three floors of stuff. All of which begs the question: what is the difference between artful collecting and mad hoarding? Or are they the same thing?

Just as intriguing are the collecting confessions of The New York Times readers who replied to the paper’s invitation to respond to the show. It turns out they collect everything from “vintage photos of men in rows” (pictures of lines of men, that is –not images of men quarrelling), to a woman who keeps the contents of her vacuum cleaner, to people who lovingly curate novelty pens or colored paperclips.

The exhibition and these reactions suggest a new chapter in the history of collecting. The psychology of the collector seems more traumatized, anxious and defensive. The type of collecting the New Museum draws attention to tends towards the repetitive, and may be hard to explain to or share with others: amassing infinite numbers of the same thing suggests not so much an interest in the meaning or history of objects or a feel for their poetry as a need to surround oneself with reassuring familiarity. “These fragments I have shored against my ruins,” wrote T.S. Eliot. Is this a symptom of the same fearfulness fuelling Donald Trump’s run at the presidency, with his offer to defend and protect Americans? Someone out there definitely has a huge collection of Trump memorabilia.

Collecting in modern art started as a flash of poetry, a dreamer’s compulsion. In the 1920s, André Breton and his fellow surrealists visited Paris flea markets to purchase strange objects that seemed to speak to them, to personify hitherto unrecognized longings. “Objects that can be found nowhere else,” as Breton writes in his book Nadja. “Old-fashioned, broken, useless, almost incomprehensible, even perverse …”

The surrealist art of collecting is the very opposite of hoarding. It is the special, unique, magical object that draws the surrealist collector’s eye: a strangely shaped spoon, a glove, an old book. From such found objects the surrealists assembled dreamlike images. Joan Miró’s 1936 Object in New York’s Museum of Modern Art includes a stuffed parrot, a stockinet leg, an old map, a suspended ball and a derby hat. It is a collection that suggests intimate fantasies and elusive poetry.

Of course, the US has a special relationship with collecting because it is the titan of consumer economies. The land of stuff is a collector’s paradise. The greatest of all surrealist collector-artists was the New York visionary Joseph Cornell, whose boxes of found objects, arranged to tell mysterious fairy stories, gloriously exist somewhere between imagination and obsession.

Cornell created his own art form out of a lifetime spent exploring New York shops and markets, finding old, strange, evocative things. His passion for clutter became, in the next generation of artist-collectors, a fascination with trash. Robert Rauschenberg’s marvelous assemblages redeem the abandoned, forgotten ephemera of all America’s yesterdays from stuffed goats to old lamps to yellowing newspapers. Rauschenberg’s apparently random discoveries in the trash combine to tell epic tales of love and death.

All these poetic delving into the world of stuff has meaning. The stuffed eagle in Rauschenberg’s 1959 work Canyon symbolizes both America and the god Jupiter, abducting Ganymede who is represented by a photograph of the artist’s son. Every object in Rauschenberg’s art has a meaning in relationship to the other objects with which it is juxtaposed. It wouldn’t be the same if he had simply collected 2,000 stuffed eagles. The meaning, if any, would then lie in the pathology that drove him to want so many examples of the same curio. 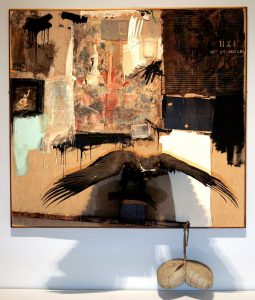 Yet this is the kind of collecting that comes to the fore in the New Museum’s latest show. Even though it spans modern history and reaches back to collectors like Nabokov, its sensibility is that of the hoarder – and respondents to The New York Times suggest this hoarding passion is widely shared by 21st-century Americans. Once, the trash was full of poetry. Today, a frightened society looks for stability in a hoard of paperclips.