Certainly, buildings are not people. It is an immense mercy that, so far as is currently known, there were no fatalities in the latest earthquake to hit central Italy. Yet I can’t help mourning the basilica of St Benedict in Norcia. To see such a beautiful old building destroyed is gut-wrenching. 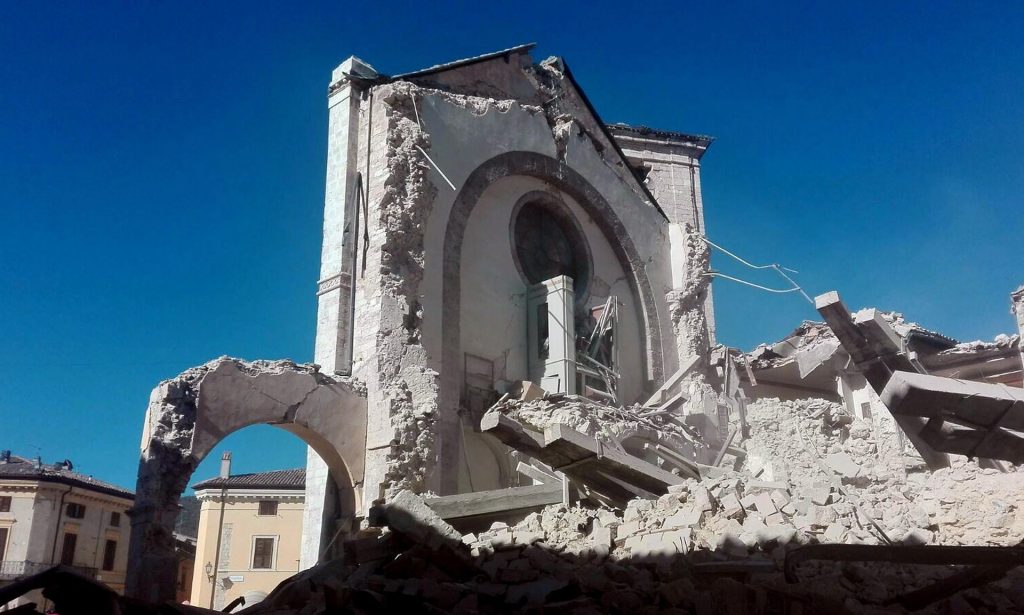 The Basilica of San Benedetto after the earthquake in Norcia. Photograph: Matteo Guidelli/EPA

The pictures than we can see speak for themselves. In the image dust fills the morning sky as the facade of the church stands alone, the body of the building a mass of rubble behind it. In another it looks as if a bomb has taken off the roof and crushed the interior.

While the images suggest restoration may salvage at least an echo of this medieval church, the loss of this and other ancient buildings in a 6.6-magnitude earthquake (Richter scale) that has left a surreal maze of wreckage over the Norcia region will break the heart of any art lover.

If I have not even visited this Benedictine abbey church, why am I sad? Because it epitomizes everything wonderful about Italy. Nowhere else has quite the same artistic and historical richness as the Italian peninsula. In towns up and down the country, layers of time intersect, and artistic treasures are part of everyday life. The basilica in Norcia was built over the reputed birthplace of Saint Benedict himself, who in the sixth century AD founded the abbey of Monte Cassino in southern Italy and wrote the Rule of St Benedict, the blueprint for western monasticism that sets out a code of practice for communities of celibate men or women living, working and praying together.

Monte Cassino was destroyed in the Second World War. Now, the basilica of San Benedetto has been smashed by nature. Is it OK to admit that I am sadder about such damage in Italy than anywhere else?

Italy’s cultural greatness defies its geological instability. From the cathedral of Orvieto, high above the Umbrian plain, to the narrow, steep streets of Siena, , this is a land of people who have built into the sides of hills, mountains and precipices. Wherever you go in the country you will find staircases up steep hills and churches clinging to cliffs.

It’s that organic sense of continuity and deep time that makes Italian towns and cities so captivating. You can picture medieval life here; can feel the presence of generation upon generation. So much life is embodied in Italy’s stones. So many stories haunt every alley and cloister. It seems that churches like the basilica of St Benedict will never vanish. Until they do.

Natural disaster is not new in Italy. Urban civilization in this geologically turbulent region has always lived with risk. Pompeii and Herculaneum are preserved as archaeological wonders because they were buried by Vesuvius in AD79. People are still living on the slopes of Vesuvius, hoping that nothing will go wrong. In the town of Pozzuoli on the edge of a huge volcanic area to the north of Naples, a section of the harbor is deserted after an earthquake here in 1983. But the sinister dead section of the town does not stop thousands of people filling up its fish restaurants on a Saturday night.

What can you do when you live in ancient communities on top of geological faults or magma chambers? You can pray. In Florence, for instance, the church of Santissima Annunziata has a miraculous painting of the Annunciation that was once taken around the city walls in a procession whenever the city was in danger from war or natural disaster. It failed to work in 1966, when this treasure house of a city was devastated by flooding.

From Pompeii to Florence to Norcia, the people of Italy have lived with disaster for millennia. Out of that instability they created beauty. Any loss of that great human fabric is a loss for us all.