Rare examples of John Singer Sargent’s printmaking have been on temporary exhibition (John Singer Sargent’s drawings and lithographs, since January 7, 2016) at the Metropolitan Museum of Art of New York City, demonstrating his interest in the expressive shapes of the human body and lithography’s potential to show these figures in darkness and light. The lithographs were donated by his sister Violet Ormond in 1950, but like many other works in the museum’s rotating Drawing and Prints: Selections from the Permanent Collection exhibition in the Robert Wood Johnson, Jr Gallery, they are not on permanent view due to their sensitivity to light.

Sargent made the series of six lithographs in 1895, even asking his valet Nicola d’Inverno to model for a couple of intense standing portraits, his body framed by a flowing cloak. The lithographs were a change from Sargent’s painting, created in preparation for an exhibition commemorating the centennial of lithography’s invention by Alois Senefelder.

Constance C. McPhee, curator in the Department of Drawings and Prints, writes in a post for the “Now at the Met” blog: “Galerie Rapp organized a section of the exhibition devoted to contemporary artistic prints and asked the British printer Frederick Goulding to help find participants based in London. Artistic lithography had flourished earlier in the nineteenth century, during the days of Daumier, but then largely became the domain of commercial printers. Around 1890, however, new transfer papers sparked renewed artistic interest. Goulding himself invented such a paper and volunteered to supply London artists, Sargent included, with the necessary materials, and then to print their work.”

The installation of the prints, which was accompanied by some Sargent figure drawings, coincided with the museum’s recent exhibition Sargent: Portraits of Artists and Friends. That showed similarly highlighted art that is often missing from the narrative of Sargent’s work, with unfinished, small-scale canvases that, while not as extreme in experimentation as other late 19th- to early 20th-century painters, demonstrate his subtle variations in technique and portraiture.

Seeing the lithographs together, some joined by their original preparatory drawings, shows a gradual evolution of the sensual male figure surrounded by sculptural draping into something more shadowy and intense. Sargent eventually chose “Study of a Young Man, Seated” to be included in the lithography exhibition at the Palais de Beaux-Arts in Paris, where a man leans forward from a couch, the tones and texture of the lithograph offering an almost theatrical shading, as if the darkness would be a pall encroaching on his body. 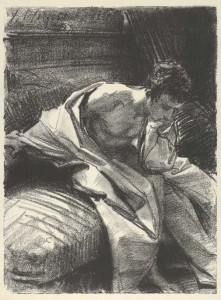 But, who was Sargent? John Singer Sargent (January 12, 1856 – April 14, 1925) was an American artist, considered the “leading portrait painter of his generation” for his evocations of British Edwardian era luxury. During his career, he created roughly 900 oil paintings and more than 2,000 watercolors, as well as countless sketches and charcoal drawings. His œuvre documents worldwide travel, from Venice to the Tyrol, Corfu, the Middle East, Montana, Maine, and Florida on the Unites States.

His parents were Americans, but he was trained in Paris before moving to London ; he lived most of his life in Europe. Sargent enjoyed international acclaim as a portrait painter, although not without controversy and some critical reservation; an early submission to the Paris Salon, his ‘Portrait of Madame X’, was intended to consolidate his position as a society painter, but it resulted in scandal instead. From the beginning his work was characterized by remarkable technical facility, particularly in his ability to draw with a brush, which in later years inspired admiration as well as criticism for a supposed superficiality. His commissioned works were consistent with the grand manner of portraiture, while his informal studies and landscape paintings displayed a familiarity with Impressionism. In his late years, Sargent expressed ambivalence about the restrictions of formal portrait work, and devoted much of his energy to mural painting and working en plein air.