On 2013, up in a hallway off the Rose Main Reading Room of the New York Public Library was a small exhibition of prints from one of Impressionism’s iconic artists. Created between 1878 and 1898 by Mary Cassatt, the quiet depictions of women in repose with family pets or viewing the opera might not immediately catch the eye of those who happen to pass by, but they represent not just the early experimentations of Cassatt, but one of New York’s greatest overlooked art collections. 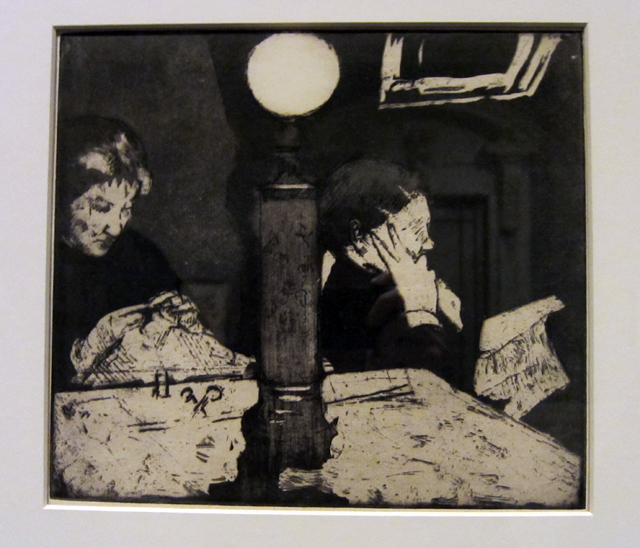 Mary Cassatt, “Under the Lamp” (1883), softground and aquatint

The reason it goes overlooked is that you usually have to make a special request to see any of the thousands of prints in the library’s Samuel Putnam Avery Print Collection  , which includes work by hundreds of artists like Francisco Goya, Edouard Manet, and Camille Pissarro. They were assembled by Samuel Putnam Avery, an art dealer who had started as an engraver in publishing. Avery traveled throughout Europe in the 19th century, importing art for his showroom at 88 Fifth Avenue at 14th Street — the best of what was happening abroad.

The Cassatt prints in have never been assembled together into one exhibition like this before this exhibition in the New York Public Library on 2013. Arranged chronologically, her experimentations, both successful and less so, are shown through different printmaking methods, working up from scratching monochromes to those in startling color. Cassatt was close to Degas, who encouraged her to try etching, one of his favorite mediums. He even did some etchings himself of Cassatt from their visits to the Louvre, one of which is on display in Daring Methods. While Cassatt has definitely been heralded for being the only American artist among the French Impressionists — not to mention a successful woman artist in the 19th century — the prints demonstrate her progressive quiet confidence in embracing the ordinary as something refined. They also show her dedication to reworking ideas repeatedly until she perfected her grasp of lithography.

Avery donated the prints to the New York Public Library in 1900, just before his death in 1904, making it the first public print collection in the city. While his influence as an art dealer isn’t readily apparent on the current landscape, his name and eye for art is still visible. As one of the founders and then a trustee of the Metropolitan Museum of Art, he contributed heavily to its first selection of paintings. He also donated an extensive archive of architecture books to Columbia University, which are held in the Avery Architectural and Fine Arts Library in Avery Hall. The library is actually named as a memorial for Henry Ogden Avery, Samuel’s son, who was a professor of architecture at Columbia and died suddenly just as his career was starting. In the Smithsonian Archives of American Art are Avery’s correspondences with everyone from Victor Hugo to John La Farge to Samuel Colman, and in the Metropolitan Museum of Art Libraries you can view a whole book of autographs and sketches from his artist friends that represent an extensive web of people that were the spirit and foundation of art in the late 19th century. While it’s a shame that these lovely prints are not in one of the better lit, more central galleries in the New York Public Library’s main building, they do offer a portal into the creative process of Cassatt and reveal the wealth of art held by Avery’s print collection.