Want to make a monster? Well, grab a big bag, head out to the countryside, and find the strangest creatures you can: bats, dragonflies, lizards, birds, snakes. Then lock yourself in your room, kill the animals and chop them up, keeping the most interesting bits: a bat’s wings, a serpent’s tail, and an owl’s eyes. Stick these together to make a terrifying, marvelous, magical new being – and invite people round to see your new “pet” before it starts to stink.

This was how a young boy called Leonardo da Vinci made a monster in his bedroom, according to his 16th-century biographer Giorgio Vasari…But, Da Vinci was not alone. Artists have been creating monsters for centuries, using exactly the same splicing technique.

Consider Caliban, the monstrous servant of Prospero in Shakespeare’s The Tempest. In about 1735, Wiliam Hogarth painted him with fin-like appendages that sprout from his shoulders, scaly legs and webbed feet. This seems only right since, in the play, Trinculo asks: “What have we here? A man or a fish? … A fish: he smells like a fish.” Monsters in art frequently invite such category-challenging questions. A unicorn, for example, is simply a horse with a narwhal’s tusk on its forehead. In fact, in the past, real narwhal tusks – which boast a distinctive spiral pattern – were exhibited as unicorn horns.

The unicorn features in Monsters, as does the dragon (body of a lizard, wings of a bat, head of a snake). But it’s the werewolf that seems to have had a particularly fascinating relationship with art. When half-men, half-wolves make it into art, the results are generally terrifying. Take Lucas Cranach’s print of a hairy man on all fours stealing away from a 16th-century German village with a baby in his mouth; or the popular 18th-century image of the Wolf of Gevaudan, a gigantic creature that towers over a poor woman it is about to devour.

Was the Wolf of Gevaudan a werewolf – or simply a gigantic wolf? One thing is known: something ran rampant in rural south-west France in the 18th century, causing the gory deaths of animals and people. It may have been the age of Voltaire, a time when the Enlightenment was supposedly spreading science, but the willingness to blame the attacks on a monster shows the lingering spectra of the irrational.

This is the most startling thing about monsters: that people believe in them, or have done so in the past. In many ways, the pages of this monstrous bestiary resemble the work of the surrealists –as wild and wonderful as a Max Ernst collage of a man with wings in a Victorian drawing room. Yet Ernst never believed there really was such a creature, just as Picasso didn’t lock his bedroom door at night to keep out the Minotaur. The monsters depicted by artists before the modern era were different. They were things that people believed existed, out there in the depths of the night, at the edge of the world.

A giant octopus embraces a sailing ship that is about to be dragged under the waves, helpless in its tentacles. Beware the creatures of the deep. Men with no heads, and faces on their bellies, parade about naked. This is not whimsy but a serious medieval illustration to The Travels of Sir John Mandeville, which tells of seeing a race of such men in distant lands. Apparently, they grin happily because they are untroubled by thought, lacking a brain.

The most fantastically imaginative of all art’s monsters, however, appear in Renaissance paintings of hell, the devil, and the demons that tempted St Anthony. To imagine these fiends, artists took Leonardo da Vinci’s monster mashup to its extreme. Every monstrous possibility is showcased – from faces on stomachs or arises to skulls for heads and men’s bodies with goats’ legs. This is the art you get – horrific, demonic – in an age when hell is real.

Scared? Probably not. Modern science has banished monsters to fantasy and fiction. We scan exoplanets for signs of life, but whatever may be out there, we’re fairly sure it’s not the Daleks. Monsters are for fun these days. Yet turn out the light, and the dark is still eerie. Look down while swimming and that shadow could be a shark.

Curiously, the most terrifying creation in Monsters takes the form of a giant skeleton stalking two men. This macabre masterpiece of Japanese art, which crept out of the imagination of Utagawa Kuniyoshi in the 19th century, is arguably not even a monster. It is us: the human form itself, stripped of flesh, returned from the grave –and more frightening than any dragon. 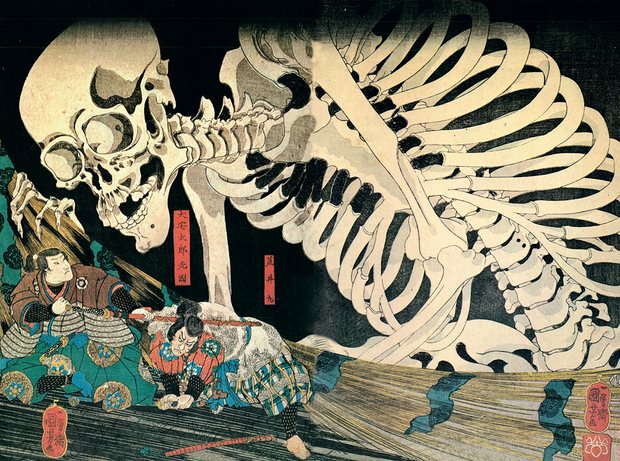