The Hague Convention on the Protection of Cultural Property

Earlier on 2017 the Government of the UK decided finally to ratify the 1954 Hague Convention on the Protection of Cultural Property in the Event of Armed Conflict and its two tougher protocols of 1954 and 1999. A bill is now being debated by Parliament that could become UK law early 2017. This is an astonishing turn of events: from being one of the world’s few major military powers (and the only one deploying its forces in combat on a regular basis) not to have ratified the convention, the UK will become the only one of the permanent five members of the UN Security Council to have ratified the convention and both protocols.

After the 62-year delay, action was swift: on 19 May the Cultural Protection (Armed Conflict) Bill was the first piece of legislation in the House of Lords the day after it was announced in the Queen’s Speech. The bill’s appearance in the Lords underlined its cross-party support and the expectation that it would pass through Parliament with little if any serious opposition. Events have proved this to be the case and the Lords passed the bill to the House of Commons in September with only minor amendments as requested by the heritage sector.

In November, the bill had its second (of three) readings in the Commons and passed to the committee stage. It is a realistic aspiration that it might receive royal assent before the end of the year, allowing the UK to ratify the convention and both protocols perhaps as early as April next year.

Is this really a big deal? Actually, yes it is, on all sorts of levels. Those of us in the heritage community are often told to stop complaining and to understand that in war things get damaged and destroyed. True, but from Sun Tzu in sixth-century BC China to Dwight Eisenhower in the 20th century, generals and military strategists have argued that the destruction of cultural heritage is bad military practice (not least because it frequently provides the first excuse for the next conflict).

There are at least seven different risks to heritage during conflict: lack of planning; spoils of war; collateral damage; military lack of awareness; looting; enforced neglect and specific targeting. All of them can be addressed to a greater or lesser extent, thereby reducing overall the impact. Protecting cultural heritage is not only important to specialized academic interests, heritage represents communal memory, and access to it has recently been argued to be a human right by the UN’s special rapporteur for cultural rights. It contributes to well-being and can foster post-conflict economic stability by encouraging tourism. 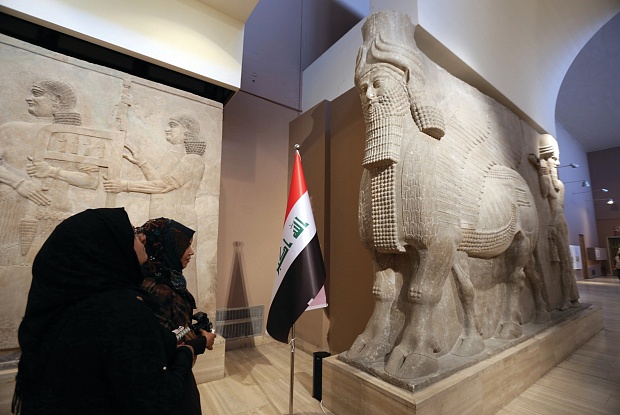 The National Museum of Iraq (reopened in 2015)

Finally, it is increasingly recognized as a military “force-multiplier”-protecting the heritage of your enemy may not win you many friends but it should ensure you do not make more enemies: a lesson hard-learnt from numerous recent cases where cultural heritage was ignored and not protected by occupying forces leading to unnecessary problems and casualties.

At the same time the UK decided to ratify the Hague Convention it created a £30 million Cultural Protection Fund. This was an excellent commitment and together with ratification it makes the UK as one of the world leaders in this area. The opportunity offers itself to become the world leader. Cultural property protection does not happen in a vacuum: much of the pressure on the government to finally engage has come from the International Committee of the Blue Shield – the so-called “cultural equivalent of the Red Cross”. What a statement it would be for the government to really commit to the protection of cultural property by establishing a small, permanent central team for the Blue Shield to co-ordinate activity in the future.