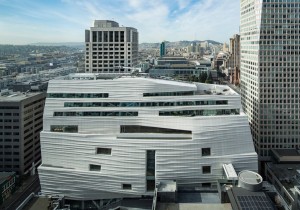 Inside the newly expanded San Francisco Museum of Modern Art, one of the most startling sights is the absence of works on the towering walls flanking the main zigzagging staircase.

When the museum officially reopens on May 14, after a three-year closing, a $305 million addition by the architecture firm Snohetta and a campaign that elicited some 3,000 works of art from donors, it will have bragging rights on many fronts.

Spanning a full city block at its widest, with a dynamic white structure that resembles a cruise ship, the museum will be the largest in the Bay Area. It will have more exhibition space dedicated to photography than the Getty in Los Angeles, and more gallery space than the current Museum of Modern Art in Manhattan.

It will also have extraordinary concentrations of 20th-century art: Calder mobiles, Warhol silk-screens, Richter paintings and LeWitt wall drawings across three floors, thanks to a 100-year loan by the Gap founders Don and Doris Fisher that necessitated the expansion.But curators at the museum, who don’t want it to be seen as the Fisher Museum of Modern Art, are already working hard behind the scenes to bring the museum into the 21st century. They are seeking to bring a visual and cultural diversity to the museum that the Fisher collection, rooted in blue-chip work of the white male art world of 1960s America and Germany, is lacking.

San Francisco MoMA has always had a commitment to the emerging, the experimental and the new, but that has waxed and waned over the decades. It’s more important than ever that we strongly commit to being engaged with contemporary art in its global dynamics.

“Global contemporary” is a buzz phrase heard in museum board rooms throughout the country. It will be interesting to see: What’s going to set them apart from every other museum in every other city that has contemporary ambitions?

Among the contemporary initiatives underway are film programs, community-driven projects and residencies for performance artists. The museum’s director, Neal Benezra, plans to hire a curator this fall to focus solely on contemporary art “across all collecting categories,” shaking up departments long organized by medium: photography, media arts, architecture and design, and painting and sculpture.

Elsewhere in the building, signs of the museum’s commitment to the hyper-contemporary and geopolitically diverse are already visible. A project room on the fourth floor has a new Bauhaus-inspired installation by the Berlin-based Portuguese artist Leonor Antunes, while the seventh floor (the top floor for visitors) has a survey of recent donations: major pieces by Ai Weiwei, Mark Bradford and Mark Grotjahn, as well as some less predictable choices.

One surprise is Brad Kahlhamer’s 2014 hanging wire sculpture “Super Catcher,” which looks like dream catchers caught in an archaic fisherman’s net, studded with small bells. Another standout is a vibrantly patterned and painted collage, by the Nigerian-born Njideka Akunyili Crosby, that depicts her own cross-cultural wedding. She kneels in traditional African dress and offers her American husband, who wears jeans, the ritualistic palm wine.

Katie Paige, a trustee at the San Francisco Museum of Modern Art, has started a contemporary-art support group to organize studio visits with artists, trips to biennials and fairs. It’s meant for new collectors, including the Silicon Valley entrepreneurs and investors whom everyone in cultural philanthropy seems to be chasing, with little success.

“Maybe we can’t compete with L.A. or New York in terms of the depth of museums or galleries or community of artists,” Ms. Paige said to Jori Finkel in an interview for The New York Times (April, 29, 2016). “But we certainly compete very strongly on the collectors’ end. And this group is a way for the museum to reach a new generation, a younger donor base.”

A long-running group affiliated with the museum supports Bay Area emerging artists; this newer one has a more global focus, in line with the curators’ expanding interests.

A new impact and a new item to visit San Francisco!