TRUMP AND THE TYRANS OF ANCIENT ROME

He looks like a strong man, the strongest. Holding a huge club to beat his enemies with, the Roman emperor Commodus wears a lion skin over his bearded, empty-looking face in a marble portrait bust made in the second century AD, which is one of the treasures of Rome’s Capitoline Museum. He is posing as the mythic hero Hercules, whose muscular might made him victorious in one spectacular fight after another. The portrait literally equates the strength of Hercules with the power of the emperor.

This is an idea Donald Trump might like. He surrounds himself with gold as lavishly as any tyrant. Why not commission a portrait of himself as Hercules for the Oval Office?

The way the worst Roman emperors are portrayed in art can help us to see Trump more clearly. When we look at the face of Commodus in this eerie portrait, we are staring into the eyes of unhinged, utterly perverse tyranny. When this son of the respected emperor Marcus Aurelius took control of the vast Roman Empire in AD161 he embarked on a career of bizarre folly and monstrous cruelty. As well as executing his enemies and perceived enemies, he liked to fight in the arena, killing gladiators with his own hands in a spectacle that educated Romans found shameful and disturbing.

Remind you of anyone? Donald Trump prefers to carry out his gladiatorial combats via Twitter. He hurls words instead of javelins. Give him four years, though, and who knows –perhaps he will be chasing Meryl Streep around the stadium in his chariot before the Super Bowl…

Of course Trump is not literally like the Roman tyrant Commodus. Yet he is not exactly like a normal democratically elected leader either. In a variety of ways he exhibits a disdain for orthodox democracy.

The problem lies in defining exactly what Trump is, exactly how he is likely to act and how dangerous he will prove to democracy –this is where Roman art and history can help. We lack diversity in our examples of tyrants. Modern history has given us a stark, black and white contrast between totalitarianism and democracy. When something doesn’t fit into our democratic norms we reach for comparisons with Hitler, and when that doesn’t work we give up. Our historical memory is too short and leaves us without any analogies for someone as strange as Trump.

This is what makes Roman portraits of emperors so relevant. For instead of offering a simplistic binary image of democracy versus fascism, ancient Rome created a rich gallery of tyrants who were all different, all monstrously unique. The bad emperors of Rome were horribly original in their sicknesses and crimes.

Commodus is just one of the faces of tyranny that look back at us from Roman art. The most famous and recognizable image of Roman imperial mayhem is the plump childish face of Nero, who became emperor in AD54. Nero’s self-indulgent face mirrors his madness. He made people listen to him play the lyre and sing, in the midst of the many murders and assassinations he ordered. When he eventually killed himself he is said to have lamented, “What an artist I die.” 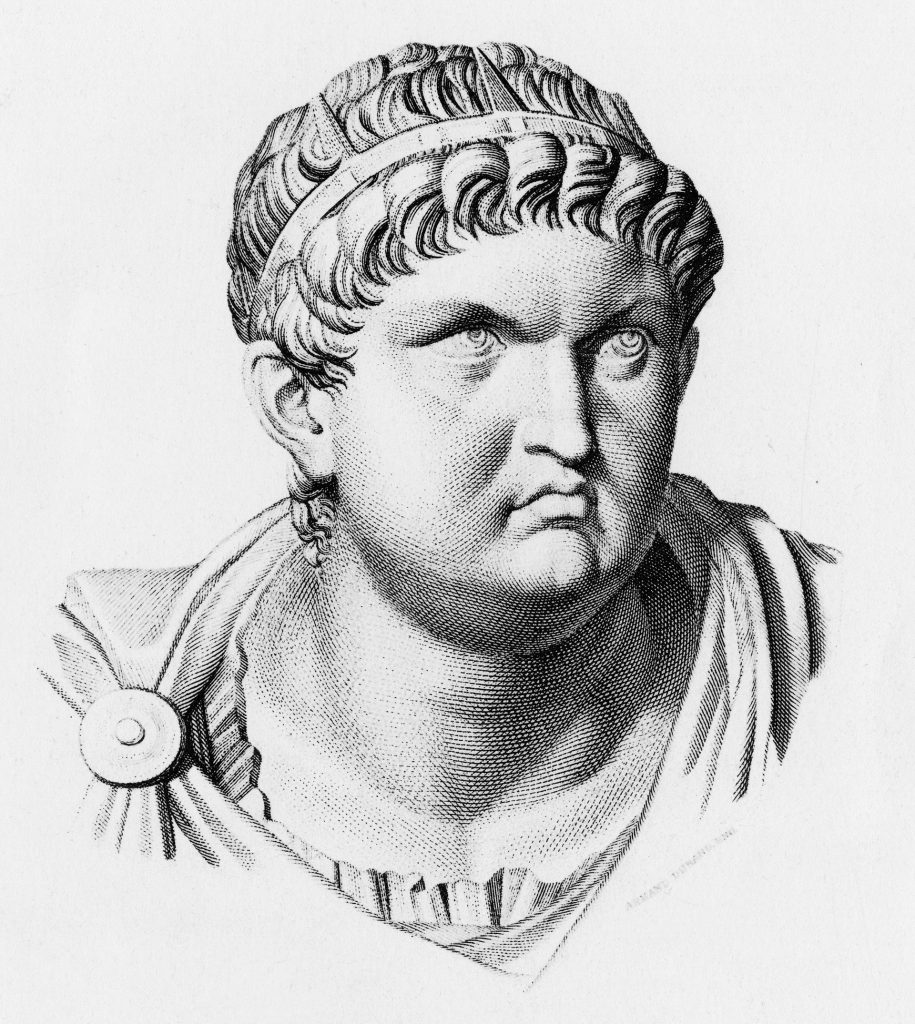 "Nero circa 60 AD", from an engraving by Armand Durand

Commodus and Nero offer two very different, but equally bonkers, images of excess and cruelty in high office. The strong man who fights in the arena and the tyrant who claims to be an artist are much richer, more pathetic images of dictatorship than our own history offers.

There’s more besides. “The Twelve Caesars” by the historian Suetonius, written in the reign of the “good” emperor Hadrian, is a collection of monsters. There was Tiberius, who came to the throne too old and rapidly descended into murderous paranoia. Tiberius was not mad, as Suetonius tells it –just profoundly misanthropic and mistrustful, authorizing his lieutenant Sejanus to torture and kill anyone who might possibly threaten him. He was also a colossal pervert. Suetonius tells how he retreated to his private palace on the island of Capri where he indulged his most horrible sexual caprices. Tiberius was followed by Caligula, who made his horse a senator and waged war on the Atlantic Ocean, among other idiosyncrasies.

You get the picture, or pictures. The Romans did not see tyranny as a single fixed set of symptoms. Tiberius, Caligula, Nero, Commodus and the many freakish rulers thrown up by later Roman history are all different, all singular. When we look at Trump, when we try to get the measure of the world’s most powerful man, we could compare him with these odd and extremely dangerous characters.

All tyrants are different –mad, bad, stupid or sick, they tend to be wild and uninhibited characters that are highly original in their excesses. So is the 45th president of the United States.