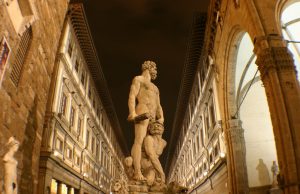 Eike Schmidt is the new director of the Uffizi Gallery here and the first non-Italian to hold the job. A difficult job, because “It’s like playing multiple chess games at the same time,” Mr. Schmidt said.

Last year, the Uffizi, Pitti Palace and Boboli Gardens merged into one entity, and 3.4 million people visited, resulting in 17.3 million Euros in ticket revenue for the State, making it the most profitable museum in Italy. Mr. Schmidt’s goal is to improve the museum’s flow; oversee a building renovation; reorganize the administration; rationalize a haphazard exhibition schedule; foster serious scholarship; rewrite wall labels; and find innovative ways to showcase a collection that has more than 12,000 paintings, 3,500 ancient sculptures, and 180,000 prints and drawings, including works from Latin America collected over the centuries but rarely shown.

But things are changing in Italy. Mr. Schmidt was hired last year from his job as a curator at the Minneapolis Institute of Art as part of a sweeping reform that gave 20 Italian institutions greater autonomy from the Culture Ministry in Rome, which funds and staffs them.

In what was perceived as a bold move, the Ministry opened directorships, for the first time, to an international search, eventually hiring seven non-Italians.

The reform, advanced by the culture minister, Dario Franceschini, was intended to bring in fresh talent and give these “super museums” – including the Capodimonte in Naples, the Pinacoteca di Brera in Milan and the Accademia in Venice- more control over their budgets, exhibitions and services like cafes and bookshops, to become more self-sustaining at a time when Italy’s economy is stagnating.

The change is dramatic for Italy, where the ministry has traditionally run the country’s museums. Since the 1990s, some museum functions, including temporary exhibitions, were outsourced to private companies, creating a confusing overlap of jurisdictions that the reform hopes to untangle.

“The decision to appoint 20 directors at the same time is very courageous,” said Umberto Allemandi, the editor and founder of the Giornale dell’Arte, an Italian arts monthly. “I’d almost say it’s reckless, but it’s necessary, because if you don’t do things in a clamorous way, you run the risk that another 20, 30, 40 years will pass.”

The question facing Mr. Schmidt -can Italy change? – is the same one facing Prime Minister Matteo Renzi, a former mayor of Florence who is deeply invested in the museum’s fate. He came to power in 2014 promising reform but now sees growing resistance. Creating the autonomous museums is a key part of his legacy. Both are in play, if not in jeopardy.

Italy has pledged €58 million, to double the Uffizi’s exhibition space by converting offices into galleries, and to build a new exit for better flow. Mr. Schmidt hopes to move the paintings to a space in the Uffizi with climate control and to display Greek and Roman inscriptions that are less sensitive in the Vasari corridor, allowing visitors to cross from one museum to the other.

But with change comes resistance. Private tour groups don’t want to lose revenue. Marco Agnoletti, a spokesman for Florence’s mayor, said the director’s plan to open the Vasari corridor to the public “has created some perplexity.” In July, a prominent Italian architect who serves on the Uffizi’s advisory committee, Stefano Boeri, said in the press that he didn’t want to remove portraits from the corridor for aesthetic reasons.

He points to other battles. He wants the guards to move from room to room, not just sit in one place. This involves potentially fraught negotiations with labor unions. Mr. Schmidt said he had been impressed by the team he inherited, but he and the other new directors want the power to shape their own staffs.

And then there’s that pesky ticketing system. Because of a complex resale market of the €8 base ticket, private tour groups wind up profiting handsomely from ticket sales. The State recently announced a new public bidding process to hire contractors to handle ticketing and other services.

To draw audiences to the Uffizi during nonpeak hours, Mr. Schmidt has begun offering live music inside the museum on Tuesdays, when it’s open late. He also signed an accord with the Maggio Musicale festival to bring opera to Pitti Palace and drew some criticism when the Pitti rented space for an exhibition on Karl Lagerfeld to coincide with the Pitti Uomo men’s fashion show in June.

Had Mr. Schmidt the support he needed from the Culture Ministry to push ahead? Your answer was: “They brought me in to do the dirty work,” he said. “They’d better not abandon me now.”