Why Magritte is a timeless genius 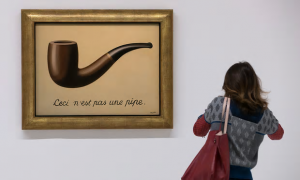 We will never stop marveling at the art of René Magritte. This Belgian surrealist who died in 1967 is forever contemporary; his paintings have never gone stale and never will. They are insidious conundrums that can never be solved, and the 21st century just can’t resist puzzling over them.

A Magritte retrospective called “The Treason of Images” is about to open at the Pompidou Centre in Paris (open until 23 January 2017), following major showings of his art this decade in New York and Chicago, not to mention Tate Liverpool. Why do museums keep putting on big Magritte shows and why do the crowds keep coming?

It’s because he undermines our philosophical assumptions about the nature of reality more pithily than a truckload of conceptual artists. In the late 1960s, John Lennon fell in love with conceptual artist Yoko Ono and became her collaborator, but Paul McCartney had him beat: he owned (and still does) a Magritte painting of an apple with the words “Au Revoir” written across it. This enigmatic image inspired the Beatles to create Apple Corps (in a pun that would have pleased Magritte, it’s pronounced “apple core”) and indirectly gave Apple computers name when Steve Jobs copied the Beatles.

While Ono’s art –or Martin Creed’s, or Ai Weiwei’s– is provocative and good fun, this kind of art (let’s call it conceptual as a shorthand) often stops at questions about art itself. “Is it art?” is not that deep a question, yet it’s the one Creed’s room, with the lights going on and off keeps us asking. Magritte does not make anyone ask that question. We accept his paintings are art. They are paintings, aren’t they? They even have nice frames. Yup, that looks like art alright.

They are also nicely painted, in an almost pedantic way. Not for him the radical prising apart of appearances pioneered by cubism before the First World War or the strange techniques with which his fellow surrealist Max Ernst attempted to tap into the unconscious roots of art. Magritte paints with a sincere amateur’s pedantry and a belief in the perspective tradition that would please the most conservative connoisseur.

Except it all goes wrong, somehow. His 1928 painting Man with a Newspaper, which hangs in Tate Modern, depicts exactly what it says in the title. A man in a starched collar and businesslike clothes sits reading his paper next to an iron stove in a neat room looking out on a blue sky over green fields. It is all very normal, even banal. But this scene only fills the top left section of a picture divided into four. In the other three panels everything is identical – except for one absence: the man is not there. His chair is exactly where it was. The stove is the same, the table, the picture on the wall, the view out of the window – all utterly identical. But there is no man.

What does it mean? Magritte belonged to the surrealist movement, but its intellectual hero Sigmund Freud is not much help understanding this (for it’s not about sex). Nor are the sentimental values we often bring to art of any use. A contemporary installation in which someone vanished might well be interpreted as a work of “mourning”, an image of loss and death: but we instinctively know this painting is not mournful or sad. That’s because the man is portrayed without a shred of empathy. He looks a nonentity. His disappearance is not that big a deal.

Perhaps that is part of Magritte’s point. We exist, and then we don’t. The world will be there when we are gone. The dull factuality of physical things does not need human perception to make it persist. Thinking about this through Magritte’s eyes becomes terrifying: that when you leave your home and lock the door all the objects in it still exist, unconscious as they are, without any need to be known, to be seen, by a conscious human.

That’s one eerie way of looking at it, but there is no easy way to “decode” a Magritte painting. His art placidly and calmly asks terrifying questions about the solid things we take for granted.

You know nothing, smiles the bowler-hatted magician, as he pulls away the rug from under your feet to reveal there’s no floor, either. And that’s not even a pipe you’re holding in your hand.