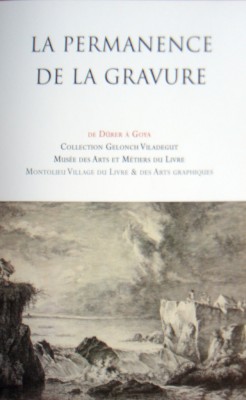 In the occasion of Montolieu’s exhibition, and for the catalog, Mr. Mestre and I prepared these crossed conversations.

Antoni Gelonch: I have a special preference for a work of Piranesi because its acquisition came at the very beginning of the Collection. This work is called “Veduta di Campo Vaccino” and it is one of the “Vedute di Roma” that made Piranesi to be known. It is an etching of the 18th century that presents a mix between the idealized image of past Roman, the beauty of the classic architecture and the discovery of the ruins of this creative civilization. It is this ecstasy of Rome as mother of cultures that fascinates me. It is the beauty of the feature, the delicacy of the style and the evocation of the beauty which captivates me.

Francesc Mestre: it is very difficult to choose a single work within a collection. I often experimented that it depends on the mood of the moment, but as we ask me to hold choose one, my choice will go towards Rembrandt (that we can see in the exhibition) “Jacob caressing Benjamin “, circa 1637, which we knew previously had already known as “Abraham caressing Isaac “. With the pretext of a biblical reference it represents the paternity, even if I observe the relation with my grandchildren there. It is an etching, a technique completely mastered by the author that the author raised the summit.

Antoni Gelonch: in my case, I believe we can say that the Collection was not created, but that it made itself. It built itself gradually at the beginning (more than 15 years ago) then with ‘brio’ these last 6 years, since I was lucky to meet you, Mr. Mestre, through a common friend who knew my interest for prints. To make a collection is, in my case, an intellectual and aesthetic construction which provides me, and the people who can see it, moments of inmost satisfaction, stimulation and enjoyment. The Collection is built according to the questioning which a work inspires me or provokes; it is not the signature which makes me decide, but the aesthetic shock which it produces me. Without this shock, without feeling called out, acquiring a work has, in my opinion, no big interest. I always like being confronted with a creation aesthetically provocative.

Francesc Mestre: Well, I do not consider myself as a collector. My profession contains the choice of the works while thinking of my customers being pleased. However, I have at home, not only works which were offered to me by certain artists, but also some pieces which move me particularly as well as the other members of my family.

Antoni Gelonch: Engraving represents a privileged way of access for people to art. Being by definition a multiple technique, it was and it is the opportunity for most of us to reach the Great Masters, to reach the knowledge of their works and to reach the beauty. And it is also a way for the artists to be known by more people and also to earn their living. Engraving is the most democratic of Fine arts.

Francesc Mestre: certainly the engraving was born in contact with printing. It had for function to illustrate the written texts, and had the will to spread the literary and aesthetic culture. Although at the beginning these two things were available for few people, it participated to strengthening the European culture and the culture generally, starting from there. I completely agree with you that it is the most democratic of Fine arts.

Antoni Gelonch: the relation between collector and gallery owner, in my opinion, must be based on mutual trust; on the interest of the collector to learn, and of the gallery owner to cross information and cultural knowledge; on the respect for the aesthetic choices of both; on the respect for the conditions of economic exchange; on a sharing of the cultural and artistic ideas after all, for a love, so shared, for an art, a beauty, a conversation, a life! I believe to the gallery owners catalysts, capable of generating reactions on behalf of the collectors.

Francesc Mestre: in my opinion the whole world of the art takes sense when the one of us is capable of feeling a deep communication with the creator and the inspiration of a work. The final addressee it is we, that all can take advantage of all that which is proposed to us, from the oldest of the artists to the most contemporary. The gallery owner it is the one who chooses and presents it to the public. The great works should go to museums, but the world of the engraving allows that a part of these works can remain more time in hands of the private individuals. But also, and thanks to such collectors like you, Mr. Gelonch, they can be exposed and admired.