Lot and his Family leaving Sodom 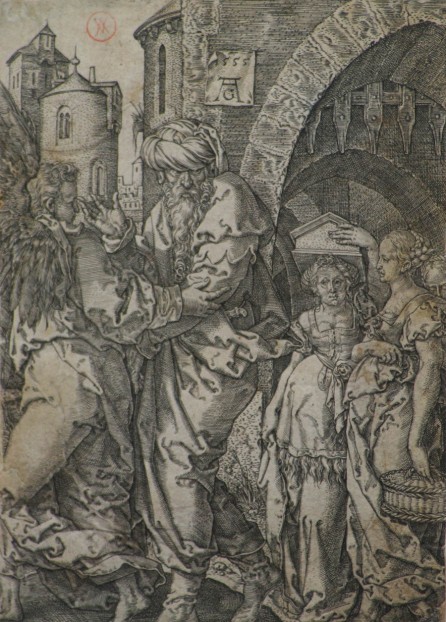 Sorry, this entry is only available in European Spanish and CA.

Heinrich Aldegrever or Aldegraf (1502–1555 or 1561) was a German painter and engraver. He was one of the “Little Masters”, the group of German artists making small old master prints in the generation after Dürer.

Painter, printmaker and goldsmith active in a Westphalia milieu. Born in Paderborn. His real name was Trippenmecker, which in Westphalian dialect means a clog-maker. It is not known where Aldegrever was taught. He probably worked in a workshop of one of the Soest goldsmiths. His early works show a strong Westphalian influence. Aldegrever made a journey to the Netherlands, where he became acquainted with works of Joos van Cleve, Barendt van Orley, Lucas van Leyden and Jacob Cornelisz.

Around 1525 he moved to Soest, where a year later he painted the wings and predella of the Mary altar for the church of St. Peter. His signature and symbolic clog show that he was still using his father’s name.

His first engravings appeared in 1527. They were signed with a monogram “AG”, resembling closely that of Albrecht Dürer. In 1531, influenced by surrounding religious fervour, he became a...

Lot and his Daughters

Fifteen Children at a Round-Dance