Born on December 16, 1866 in Moscow (Russia), Wassily Kandinsky was a painter, printmaker, stage designer, art theorist, and a central artist in the development of 20th century abstract art. Kandinsky studied economics, ethnography and law in Moscow from 1886 to 1893, and wrote a dissertation on the legality of […]

On 2013, up in a hallway off the Rose Main Reading Room of the New York Public Library was a small exhibition of prints from one of Impressionism’s iconic artists. Created between 1878 and 1898 by Mary Cassatt, the quiet depictions of women in repose with family pets or viewing […]

Remembering Forgotten Female Printmakers from the 16th to 19th Centuries

In the 19th century, Henrietta Louisa Koenen, wife the Rijksmuseum Print Room’s first director, took a prescient interest in acquiring prints by women artists. These works date from the 16th century, such as a woodcut by Marie de’ Medici, daughter of Grand Duke of Tuscany Francesco I de’ Medici, to the 19th, with hand-colored engravings by Madame Alliot. In […] 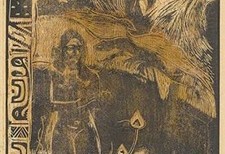 Gauguin and the Noa Noa Prints

In 1891 the French Symbolist painter and engraver Paul Gauguin journeyed to Tahiti (in French Polynesia), aiming to live simply and draw inspiration from what he saw as the island’s exotic native culture. Although he was disappointed by the rapid process of Westernization of the local community he encountered (in […]

Stand at the east end of London’s Oxford Street, look east and you will see the site of William Hogarth’s most famous picture – Gin Lane. In 1751, when Hogarth made the print, this neighbourhood was a rundown slum, prey to the evils of drink, particularly gin. The horrific 1734 […]

In the twentieth century, many of the most significant sculptors were also printmakers, several of them committed and prolific. While the comparatively flat surfaces of printmaking might not initially seem to offer much incentive to artists whose vision most naturally asserts itself in three dimensions, an examination of the range […]