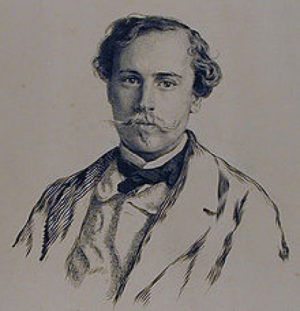 Jules de Goncourt (17 December 1830 – 20 June 1870), born Jules Alfred Huot de Goncourt, was a French writer, who published books together with his brother Edmond. Jules was born and died in Paris. His death at the age of 39 was at Auteuil-Neuilly-Passy of a stroke brought on by syphilis.

Jules de Goncourt was an Historian of the eighteenth-century French art world and early champion of modern trends for art; art critic of nineteenth-century Paris and part of a famous art-criticism team with his brother, Edmond. Jules de Goncourt and his older brother, Edmond, were born into minor aristocracy. The family wealth enabled the brothers to become self-indulgent pleasure-seekers, devoting time to writing and being artists; Jules’ etchings were eventually published. The assembled a collection of eighteenth-century art, largely drawings and pastels, which were not popular at the time. The brothers made their initial reputation as journalists writing art criticism. In 1851 the two began their journal, chronicling their art scene, which they continued throughout their lives. The brothers were arrested in 1852 for quoting mildly erotic Renaissance verses in one of their articles. Jules acquired art album of Japanese prints in 1852, spurring a national interest in Oriental and particularly Japanese art, known as Japonisme. Jules ceased reviewing art the same year (his last review was the Paris Salon of 1852).

In an important 1855 account of the Exposition Universelle, “La peinture à l’Exposition de 1855”, they suggested that painting was “a daughter of the earth,” an art in which color, not line, was the core value. They attacked the predominant painting genre of French official art, the dark history painting style espoused by the Académie, as a poor subject for painting. Instead, landscapes and contemporary genre were the acme of modern painting for the Goncourts. They published essays on eighteenth-century artists intermittently in various periodicals. Beginning in 1856, the two published these essays in a collected series, called L’Art du XVIIIè siècle (ultimately 12 fascicles completed in 1875). It remains their most important book. Illustrated by Jules (two by Edmond), the book was responsible for the revival of interest in the rococo as well as the working methods of French 18th-century artists from Watteau to Charles-Nicolas Cochin. The brothers wrote about all French artists of the eighteenth century, not just the famous.

They also produced novels in the Realist vein as  Germinie Lacerteux (1864) and Manette Salomon, about the studio practice of contemporary artists. The prix Goncourt was conceived by the brothers in the same year (1867) as the Académie Goncourt, a literary society of 10 members. As art critics, the Goncourt’s focused on the Barbizon school. Their chief modern artist was the (now largely forgotten) artist Paul Gavarni about whom Edmond completed a separate book, after Jules’ death, in 1873. His life–as indicated in the Journal –was a steady stream of encounters. This Journal is an important primary source for Parisian literary and artistic life. A formal Académie Goncourt was established in 1903 through a bequest of Edmond.