Matisse and the Book Arts

In Paris during 1946, Henri Matisse made a series of portrait drawings of a notoriously splenetic theater critic named Paul Léautaud. One of the images was to be made into a lithograph for the frontispiece in a book of Léautaud’s writings. Over a number of days that August — a dozen, in Léautaud’s probably exaggerated estimate — the critic sat for the artist, and the two chatted amiably during the sessions.

Léautaud was not impressed by the final product for the frontispiece. Drawn in a few deft lines, it shows him with head tilted and with squinting eyes framed by oval spectacles in a sweet, quizzical expression. Despite the hours and days it took to create, it looks as if it could have been made in about half a minute. “So much work, so many studies to end up with that,” was Léautaud’s incensed and dismissive reaction.

Was he right to complain? Viewers may judge for themselves as the book, open to Léautaud’s portrait, is included in “Graphic Passion: Matisse and the Book Arts”, an absorbing and revealing exhibition at the Morgan Library & Museum (until 2016, January 18) that presents 30 of the nearly 50 books designed and illustrated by Matisse during his career. Organized by John Bidwell, the Morgan’s curator of printed books, the show also includes numerous drawings, studies and prints not used in books. For Matisse scholars and for anyone with more than a passing interest in that artist, the exhibition and its catalog are a must. 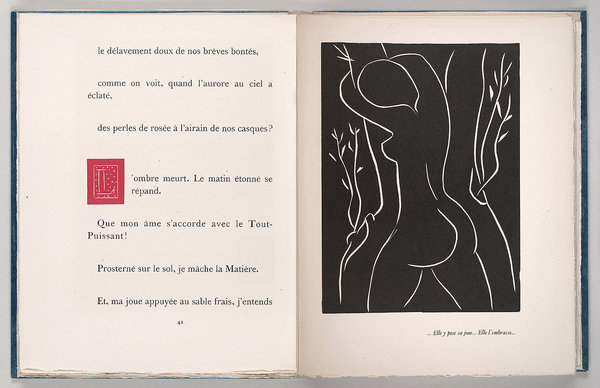 In illustrating editions of literary works like Baudelaire’s “Les Fleurs du Mal,” James Joyce’s “Ulysses” and Stéphane Mallarmé’s poetry, Matisse aimed for balance between words and images. Not wanting to overshadow the texts, he tended toward understated simplicity and subtlety. Except for his book “Jazz” and the similarly vibrant covers for the art journal Verve, there’s hardly any color in the exhibition.

While his prints and drawings often appear to be created with minimal effort, Matisse worked hard and with extreme conscientiousness through trial and error to achieve an effect of carefree spontaneity. To understand that, it helps to see multiple variations of particular subjects, and there are some illuminating examples in the exhibition. One instance is his work for a modern retelling by Henry de Montherlant of the myth of Pasiphaë. It’s about the sexual congress between Pasiphaë, wife of King Minos, and a white bull sent by Poseidon, by which the Minotaur was conceived. Matisse created white-on-black linocut prints for the book, among which is a simple, rather benign bull’s head rendered in white lines on a black rectangle. A study for that image has more than 20 small, delightfully lively variations on the bull drawn in ink.

Matisse worried that the mostly black linocuts for the book could strike readers as gloomy. So he created blocky initials to be printed in red for the first letters of words beginning most paragraphs, an idea he took from a Renaissance tome. He fretted not only over the design of the letters but also over the red color, which he wanted to be “gay as a poppy.” He told the printers, “If we can’t get that quality of red, we will have ruined the entire effect just as a sour note from the trumpet can spoil a lovely piece of music.” Published in 1944, the book was a commercial success, as the first edition of 250 sold out by April the next year. It ranks among Matisse’s finest illustrated books.

Another enlightening case is a two-page spread illustrating Mallarmé’s “Le Guignon” (“The Jinx”). Above the text on the right side is a large hand grasping part of a pole — perhaps a spear — etched in a thin black line. The left page is filled with the image of a running female figure with arms thrown upward and long hair flowing in the wind. Whether she’s fleeing in panic or cavorting in ecstasy is hard to say, but the etched lines describing her are joyfully animated.

Displayed along with the finished pages of “Le Guignon” are sketchy, etched and penciled studies for the figures. It’s almost shocking to see how Matisse progressed from those uncertain tries to the final images, which seem unpremeditated, as if born in a moment of divine inspiration.